The top 10 Dorset open mic nights. Known for its rural countryside and tranquil coastline, Dorset may not be the first place you’d expect to find a bustling music scene, but it has an abundance of hidden gems to suit every taste. Below, we take a look at the top 10 open mic nights in Dorset covering towns such as Bournemouth and Poole.

Looking for an open mic night in Dorset? In no particular order, these venues attract the best of the city’s breakthrough musical talent. 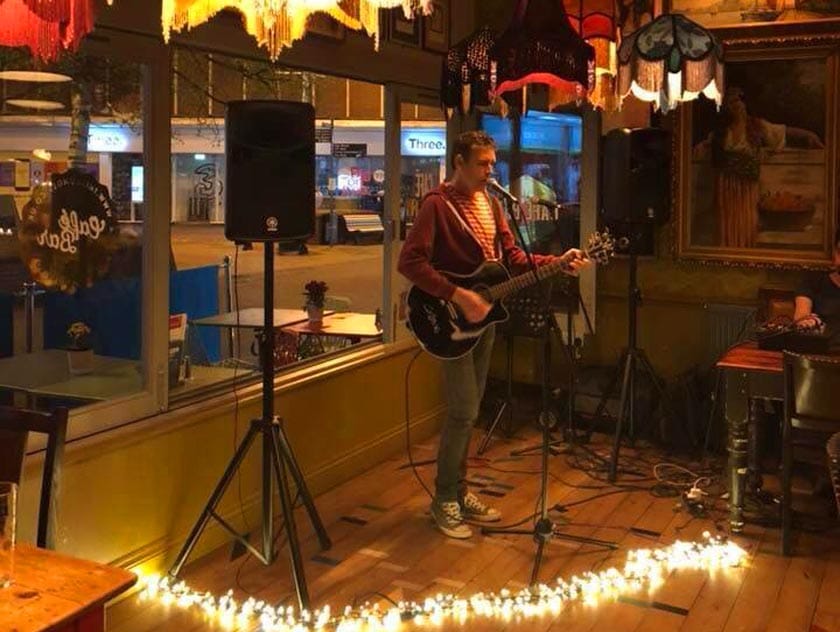 A newer open mic in a popular venue, Delfino Lounge is in a great location overlooking Falkland Square. They’ve got floor-to-ceiling windows that open right up along the front; ideal for a relaxing evening of music.

The lovely and talented Samantha Laurilla is your hostess for the night, with each act invited to sing up to three songs. There’s no stage, with acts performing against a backdrop of wall-to-wall artwork, with muted lighting and plenty of space to move around.

There’s a PA system all set up, so performers just need to turn up with their instrument of choice or a backing track. It’s quirky and easy-going, with an appreciative audience and a free drink for all acts.

They do limit the evening to 12 slots, giving each performer a fair chance to display their talent.

Added bonus: if you impress them with your expertise, they’ve got two paid monthly slots up for grabs on the last Saturday of each month.

Hosted by Si Genaro, who dubs himself a “semi-professional indoor busker” with assistance from Nacho Jase, this weekly affair has garnered a dedicated following and created some very memorable evenings.

The setup is simple, with three mics across the stage, an acoustic guitar available for use, plus an in-house PA system and a stage monitor. Nacho is happy to accompany on bass if required.

Acts are allowed 3 tracks each, but if you fancy performing, make sure you arrive early to get your name down on the board. These nights do get really busy.

Jamming is encouraged and all bands and performers are welcome.

This Victorian hotel is steeped in history, with the open mic being a great start to the weekend. It’s held in the bustling main bar and you’ll find a wide range of offbeat instruments, from didgeridoos to bagpipes.

The host is local musician Mik Parsons, who provides lighting, a PA system with mics, and plugs for guitars. The idea is to simply turn up, make some noise and have some fun.

They encourage visitors to, “folk up, pop down, jazz in, and rock out” and they see a mix of regular players and new talent each month.

How do Open Mic Nights Work? 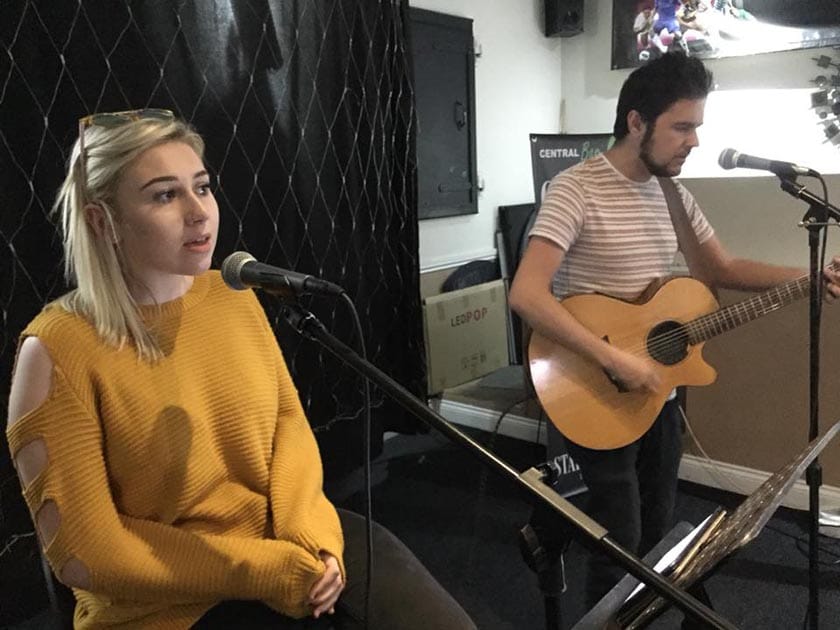 Recently relocated to Lansdowne, Buffalo Bar is famous for its regular live music events, DJ sets and Jam Sessions, and they’re looking to continue that tradition in a new home.

Their original open mic was one of the longest-running in the town and attracted a colourful assortment of local characters — See the dedicated photography book which features black & white images from the original venue.

This night is generally an informal, chilled affair with a good mix of experienced musicians, absolute beginners and everyone in between.

Rab (of Dead Lettuce fame) is the evening’s host; a jolly, ginger Irishman with a welcoming attitude who’s happy to provide back-up if required.

There’s an acoustic guitar and a 4 track mixer with two microphones available for use.

The usual free drink for all performers is on offer.

The Green Man is a lively traditional pub full of charm and character, and they’ve put together an open mic night to support local musicians and provide a venue for some of the superb musicians the area has to offer.

Run by the Acoustic Connection, experienced local open mic organisers and the creators of Ringwood Unplugged, this monthly event displays some of the freshest up-and-coming local musical talent.

Pop in and listen to an assortment of live music, spanning many genres and ages, then join the line-up when you’re ready.

Whether you’re just starting out, or have been performing for years, this smallish venue is ideal for showing off your skills. 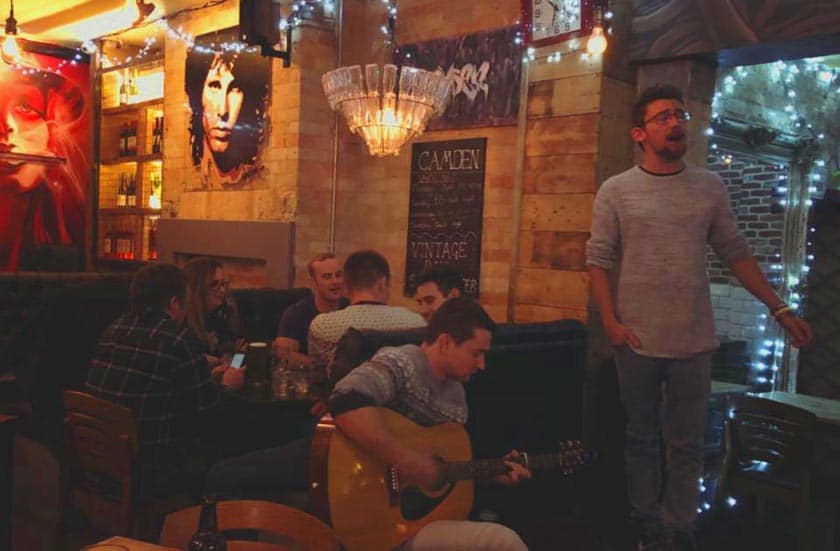 A popular café bar with a peaceful vibe, good music and a faithful clientele, their open mic night is described as, “Awesome music by awesome people for an awesome crowd.”

The décor is rustic, with exposed brick walls, twinkling fairy lights, and worn chalkboard displays. The staff and audience are welcoming, with a free beer for all performers, if a bit of Dutch courage is needed.

There’s a two-song maximum, with those watching asked to be respectful while acts are on stage.

This acoustic open mic is an intimate evening suited to newer performers looking to build their confidence.

Hosted by 2 local musicians, this open mic is a very chilled evening and very popular with the locals, with a range of performers of all ages, quite literally from 15-90.

They provide a PA system and guitars if needed, as well as the ability to plug in backing tracks, and they can usually source any other items if asked in advance.

No act too big or small, they accommodate everyone.

This open mic night bills itself as, “totally awesome and way above average” with a jolly atmosphere and all sorts of acts getting involved, including the occasional comedian or poet.

Performers range in ages from Room 13 to the house band FOG on the Quay (“bunch of old crumbles with a combined age of 245!” as he says). 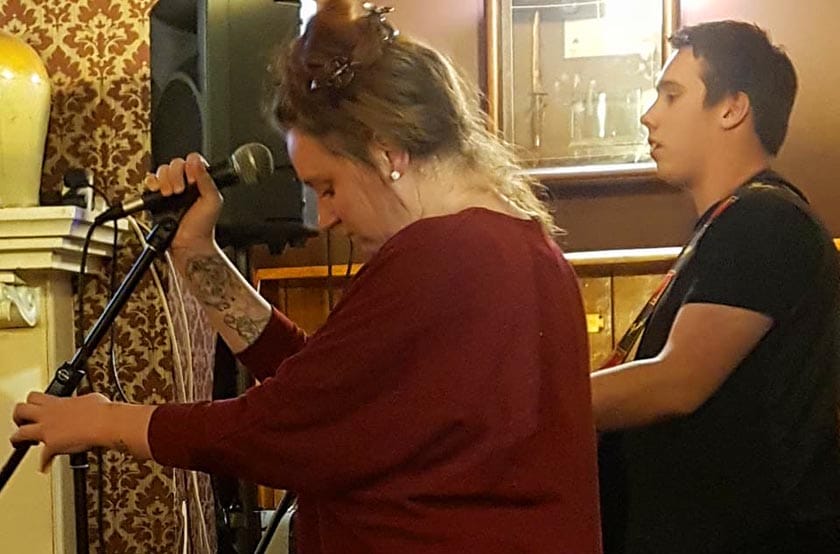 The Blue Boar is an impressive three-floor pub full of character and characters. It’s got log burning fireplaces for the winter months and memorabilia adorning the walls.

Their weekly open mic is a fun-packed and entertaining way to soak up all the local musical talents that Poole has to offer. Hosted by Calvin Glen (who also hosts the open mic night at Roxy’s), this one is very inclusive and doesn’t take itself too seriously.

Whether you want to perform or sit back and enjoy the show with a pint of award-winning ale, everyone is invited.

Nothing too fancy, the Dorset Soldier is a laid-back local pub run by Geoff and Tracy, which features two separate bars offering the best of both worlds.

A very friendly and casual mid-week offering, performers bring their own instruments, with the host Phillip Job setting up a full Bose system PA and mixer desk, with two microphones. 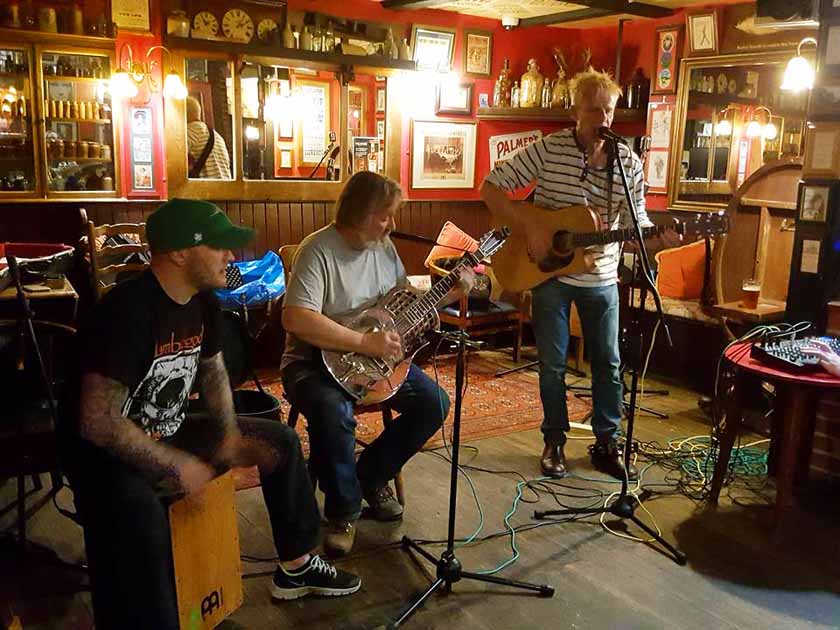 An excellent live music venue, the Ropemakers is, “a bit of a Tardis”, in that it’s bigger than it looks from the street.

Their open mic is hosted by Si Dew and Nick Randall from Behind Closed Doors and it’s a fairly relaxed night with a variety of acts, all acoustic.

They provide the PA and microphones plus the mixing desk, but they ask performers to bring their own instruments.

If you fancy showcasing some original music, poetry or something completely different, then their stage is open to all. 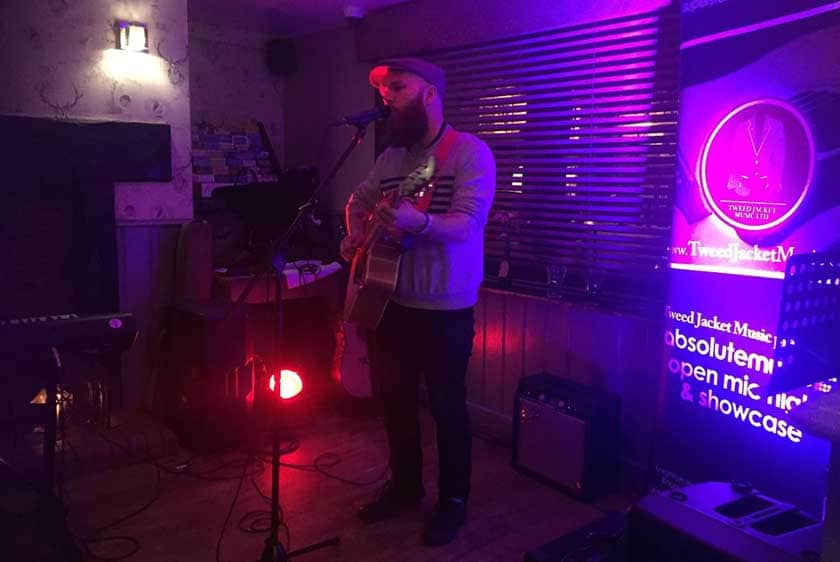 Absolute Music runs open mic nights and showcase events with Tweed Jacket all over county. The nights are hosted by professional musicians who know how to get the most out of an open mic session.

They hold various events at locations including:

A growing open mic night run by Elijah Wolf, as well as various ambassadors throughout Dorset, these events are about creating a space and atmosphere where everybody is welcome to perform.

Howl Open Mic and Howl Songwriters Showcases  have been running in the Dorset/Devon/Somerset for a decade. Howl events have gained a reputation for being welcoming and for their enthusiastic and encouraging atmosphere.

As a songwriter whose songs have been played on national radio Elijah is super keen to promote and encourage original songwriters and performers at any Howl event and is now running specific Songwriter Showcases as well as the open mic nights. You don’t need to book to play at a Howl event just turn up. P.A is provided.

Or, if you prefer, you can just relax and listen to a showcase of local music.

So now you know where to perform in Dorset there are no excuses for not getting out there and get performing!

Open mic nights near me in Dorset

Bournemouth not only possesses a gorgeous coastline and vibrant nightlife, but Bournemouth’s open mic scene is one of the best the South Coast has to offer. With new bars and music venues popping up all over, there’s definitely a buzz about Bournemouth. Perfect for experienced performers or beginners looking to get their feet wet. Open... Read more »

Southampton has made a name for itself through its thriving music scene and open mic nights. Both Craig David and British rockers Band of Skulls launched their careers in Southampton, proving that when it comes to breaking into the music industry, Southampton open mic nights are the ideal platform for burgeoning new talent to build... Read more »

Have you considered entering Open Mic UK? Auditions are coming to Dorset!

Can Prescription Drugs Affect My Singing?

How Do Artists Make Money on Spotify Per Play?