The county of Hampshire is the home of many country pubs, city bars and incredible venues for live music. From Roots Open Mic at The Railway Inn in Winchester (rumoured to be the oldest open mic night in the country) to the Tart Jam Night in Basingstoke, there’s a gig for every musician looking to perform in Hampshire. 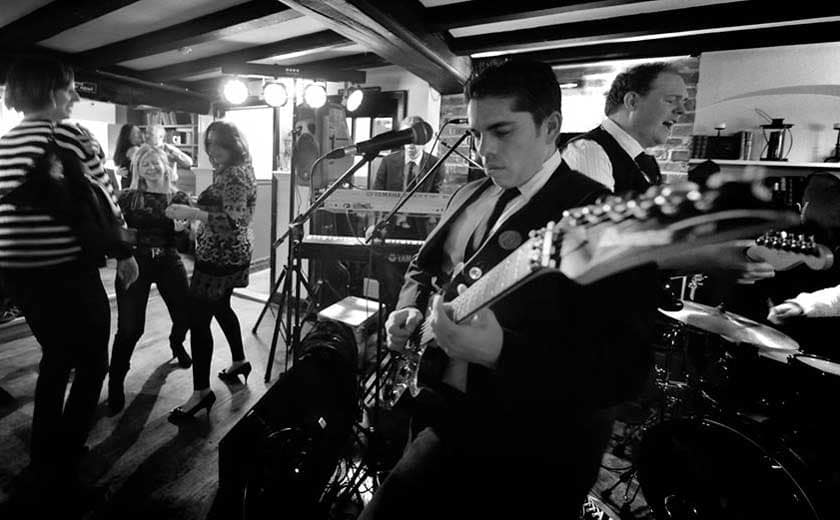 As country pubs go, The Farmers Inn has got bags of character, cosy corners to relax and a warm, welcoming atmosphere.

They host a fantastic jam night every Thursday night, where musicians from the local area come and play together. It’s run by Damiain Lodrick and most weeks he’s joined by a house band of musicians who he knows.

According to the pub’s manager, “Damiain is a local hero around these parts, a very well-respected musician, and over the years he’s created an entourage of the best players in the area.”

This helps to bring in a lot of new players to the jam night, as it can quite often benefit them getting in the local scene, plus it’s an opportunity to meet other musicians and organise gigs with new bands.

Equipment wise, there’s usually a drummer who brings a kit and there’s also a collection of bass and guitar amps on the stage too.

You can turn up on the night with any equipment you’d like to use or speak to Damiain to book a slot. It’s open to all ages, all levels, all instrument and all who wish to just watch and enjoy. There are many who just turn up to just watch and enjoy the music, while some say it’s a better night than if there had been a band hired to play.

There’s a good blend of blues, rock, soul and jazz and quite often an array of different instruments, including a whole brass section. 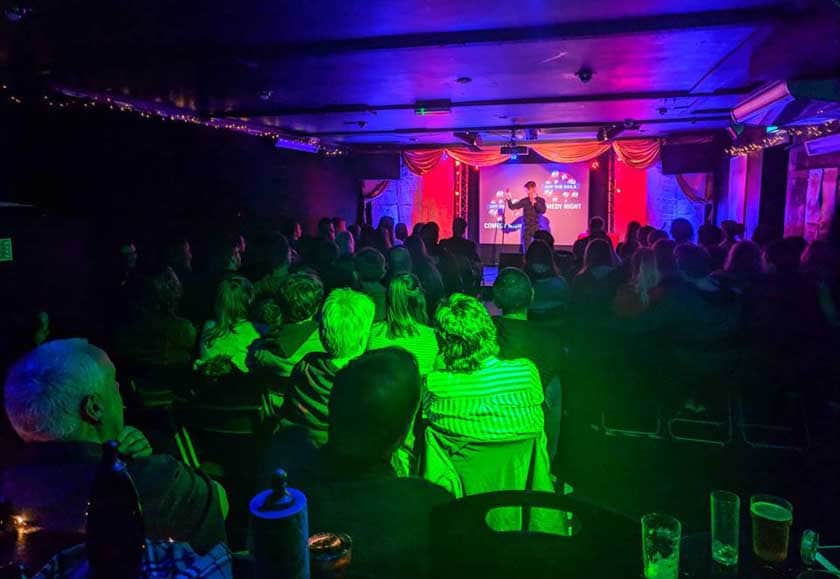 The Railway Inn in Winchester, Hampshire is a blend of traditional bar and a music venue/arts centre. Equipped with a top spec PA and lighting rig, ‘The Barn’ is their underground venue – the perfect environment to experience live music of any genre, while the upstairs venue, ‘The Attic’ has been specifically designed for acoustic acts and comedy.

Roots Open Mic Night has been running there for over 20 years, making it Winchester’s longest running open mic.

It’s been an early exploration space for a number of notable careers, including Dua Lipa, Ed Sheeran, Laura Marling and Frank Turner.

The venue has dedicated itself to live music since the late 1970’s and they also regularly showcase local, national and international acts, covering the full gamut of responsibility in terms of supporting all sectors of music.

The White Hart, or “Tart” as it’s affectionately known, is one of Basingstoke’s oldest pubs. There’s an eclectic mix of customers from all walks of life. They proudly call it a ‘proper old fashioned boozer’, where everyone is welcomed and made to feel at home.

After taking over ownership on Halloween 2016, the new owners also brought back live music. Singers, musicians, comedians, jammers and soloists are all welcome at their jam night.

Newbies and experts player alike, you can play together or alone. Try out new material or just get a feel for performing in front of a welcoming audience.

Whatever your style or ability, everyone gets a chance to perform.

Just show up on the night and get involved 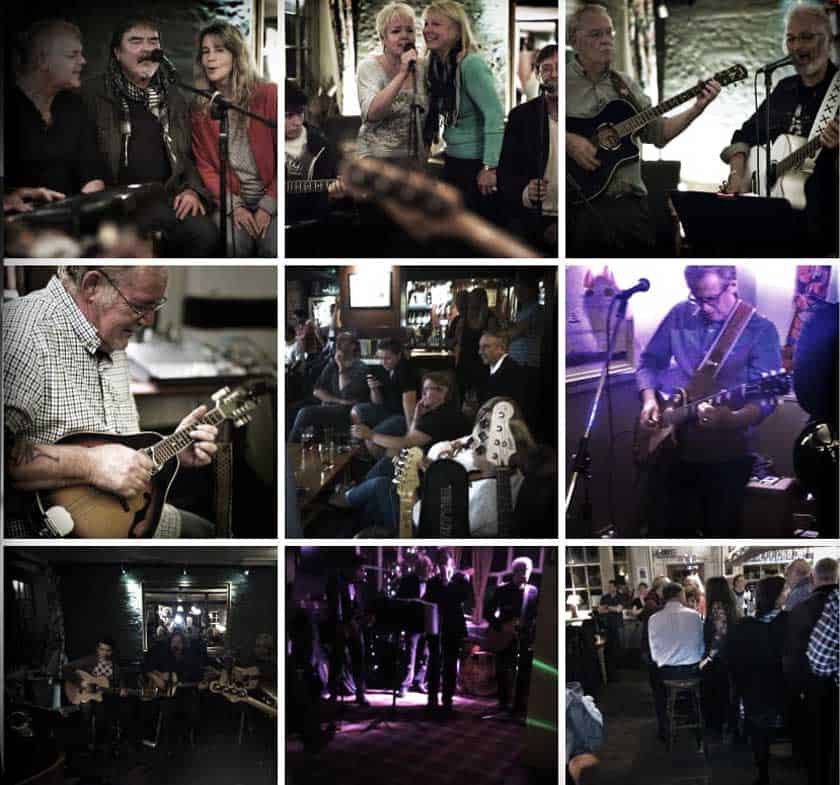 The Golden Lion a true family pub with the added bonus of excellent Indian food on offer.

Their open mic is hosted by local musician Nigel Hoar who also runs the following open mics across Hampshire and West Sussex:

Full PA with 3 mics provided at all venues with use of drums, bass and electric amps. Performers are encouraged to bring their own instruments.

Nigel will potentially be trialling acoustic only at the Golden Lion because of space and ambience, so it’s a good idea to keep an eye on his Facebook page for details. 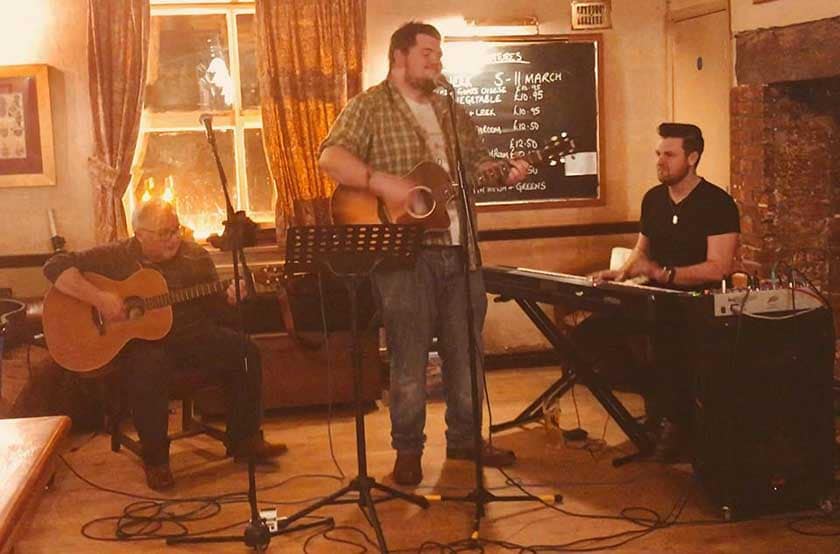 Situated on the edge of Lee-on-Solent, Hampshire, The Wyvern is a great family & dog-friendly pub offering cask-conditioned ales, a great gin bar and live music at least once a month.

Their weekly open mic night is mostly acoustic sets, with some electric. They have the usual mic, amplifier and soundboard, just bring your own instruments.

Anyone that plays gets a free drink. If they think you’re good enough, they’ll book you in for a paid gig. 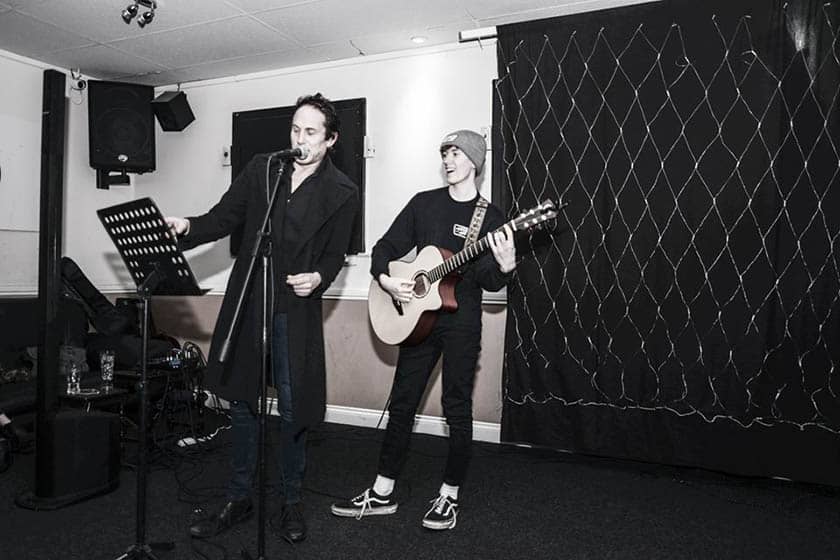 They supply the PA system so performers can plug in whatever instruments they have. It’s hosted by Si Genaro, everyone is helpful and encouraging to new acts.

Fifteen-minute slots per musician, this evening is totally casual and family-friendly.

Free drink for all performers. Open to all ages, younger performers are asked to bring an adult. 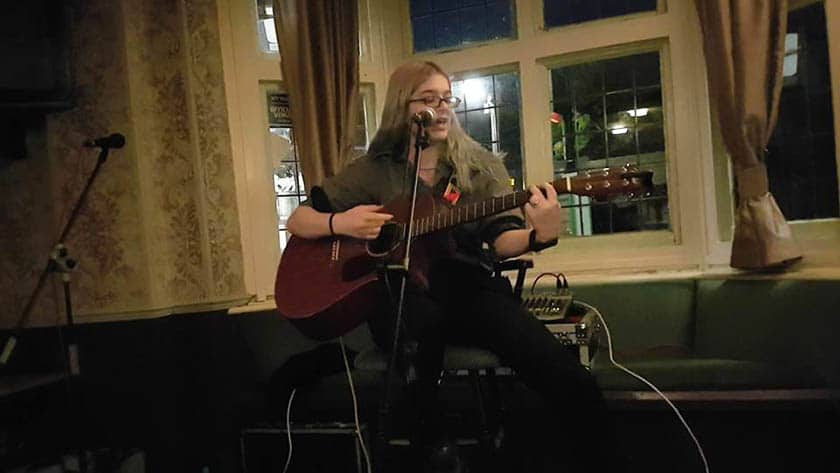 The Cricketers Arms in Fair Oak is a proper old school pub which has been hosting Del’s Open Mic for since 2017.

Run by Derick Ince (Del), this is one of the warmest and friendliest open mic venues you will find.

Del also hosts other open mics in Hampshire at:

PA, mics and leads all supplied, as well as powered speakers, a passive mixing desk and a spare guitar.

Del tries to encourage beginners and newcomers, so this is perfect for first-timers. 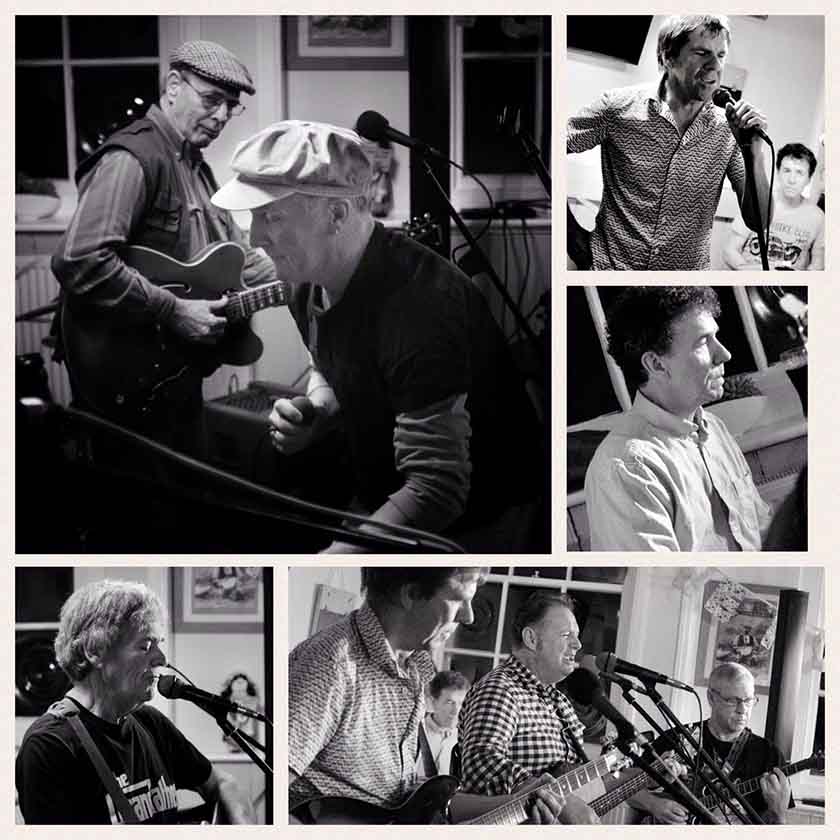 Originally an old coaching inn, The Fountain is well-known for hosting lively open-mic nights and for local bands regularly performing on Saturday nights. Kerry and Mary Sinclair took over in 2017 and the pub went through a much-needed refurbishment.

The Fountain has a rich history in music – Herbie Armstrong, a former session musician with Van Morrison, was at the helm for 14 years. As fans of live music, the new landladies wanted to keep the venue a music and sports pub.  The main bar is a fantastic venue for most bands, with the wooden floor and lay out of the bar ideal for a great sound.

Their weekly open mic is hosted by Bob Croxford, with backline and drums are provided.

Solo acts and bands welcome, but get there early if your want to participate, it’s already become a very popular night.

Butter’s is a family-run, independent business, with live on offer music every Friday and Saturday. This lively open mic night has been running for about 4 years.

The host is also a local performer and the nights are a mixed bag of entertainment. There are various musical performances of different genres, with occasional poetry and comedy. Musicians are welcome to go along and try new songs and they also are open to anyone who’d like to perform.

They supply PA system and guitar if needed, plus there’s a keyboard available. Performers are encouraged to bring their own instruments.

You’re guaranteed a fun time and it’s a great place to meet all sorts of musicians who care about great music.

The Good Intent is a rustic 16th Century coaching inn in Petersfield. The pub features original oak beams taken from the ship it’s named after and plenty of charm.

Well-known for hosting live music on Saturday nights, they are also know for their open mic night on Thursdays, which is a great opportunity to meet local musicians in the area.

The night is run by Josh and Pete ‘Chopper’ Woodward, and they have regular players that can back anyone that goes along if needed.

Performers are given 15-minute slots, with every other slot available to book ahead of time, while he alternate 15-minute slots can only be taken on the night as you arrive.

They provide a full PA system and a house drum kit, but most performers bring their own instruments.

The Welcome Stranger was once a self-sufficient public house with their own granary and on-site brewery, which regularly hosts live music evenings and specialises in real ales.

Their monthly open mic is a very low-key affair. There’s no stage and you’ll need to bring your own instruments, but hey do have their own in-house PA system and everyone is welcome to get involved.

A full backline and in-house drum kit are provided. All you need is guitars, bass, voices, etc.

All musicians, abilities and genres are welcome.

So now you know where to perform in Hampshire there are no excuses to get out there and get performing!

Open Mic Nights near me in Hampshire

Portsmouth is a vibrant waterfront city is home to some of the best open mic nights in Hampshire. From the historic Groundling Theatre to trendy burger bar Jags at 119, there’s plenty of live music venues on offer for singers and musicians to perform at. Open mic nights in Portsmouth and Southsea are most commonly found... Read more »

Southampton has made a name for itself through its thriving music scene and open mic nights. Both Craig David and British rockers Band of Skulls launched their careers in Southampton, proving that when it comes to breaking into the music industry, Southampton open mic nights are the ideal platform for burgeoning new talent to build... Read more »

Brighton and Hove has some of the Southeast’s most brilliant live music venues, with a large number hosting open mics and jam nights. If you’re looking for a Brighton open mic night, there’s a thriving cultural quarter, vibrant nightlife and a very impressive music and arts scene on offer. Brighton & Hove Best Open Mic... Read more »

Have you considered entering Open Mic UK? Auditions are coming to Portsmouth and Southampton!