Is Coffee Good or Bad for Singers? How Coffee Affects Vocal Cords

There are certain foods and drinks you should avoid if you want to get the most out of your vocals. But what about coffee? Is good or bad for singers and vocal cords? Firstly, everyone reacts differently to stimulants and caffeine isn’t recommended for diabetics or during pregnancy, so let’s discuss the pros and cons of drinking coffee when singing.

Coffee dehydrates the vocal cords and can stimulate anxiety. This effect means caffeine can alter your singing. On the flipside, when it’s drunk in moderation, caffeine can benefit your performance by providing more energy and uplifting your mood.

Is coffee good for a singing voice? 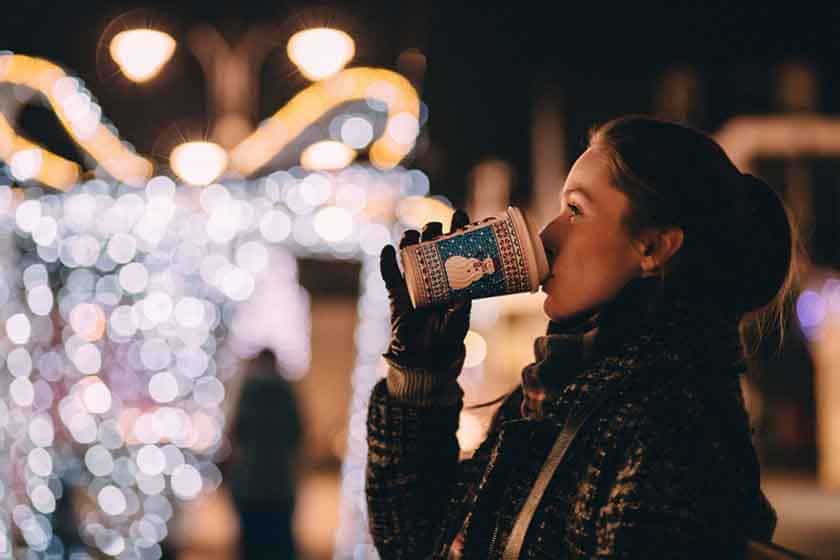 Coffee isn’t recommended for people with some disorders or health implications. For example, if you suffer from anxiety, we highly suggest avoiding coffee on the day of your performance. Caffeine is a stimulant and encourages a ‘fight or flight’ feeling, which can make a person’s anxiety even worse. Drinking caffeine if you already suffer from anxiety could even cause a panic attack.

Performing can be nerve-wracking enough, without stimulating your anxiety even further. Just 200mg of caffeine (two cups of coffee) can increase your breathing rate, make your heart beat faster and also increase your body’s temperature.

Although these side effects are psychical, it’s difficult to calm your mind when you’re experiencing these symptoms. Someone who’s more anxious is more likely to experience these negative side effects.

So, if you’re less responsive to anxiety, where does this information leave you? Studies have found that if caffeine doesn’t affect your wellbeing or physical behaviour, you don’t have to reduce the amount of coffee you consume. However, don’t increase your dosage before performance days.

What to Eat and Drink Before Singing

What you eat and drink in the hours before singing has a considerable influence on how good your voice is. Most performers understand how important it is to look after their voice, as the health of a singer’s vocal cords can make or break a performance. This article lists the best things to eat and... Read more »

Is coffee good for your vocals?

Your vocal cords need water to stay hydrated. Water is also beneficial to improving the flexibility and efficiency of your vocal cords. Coffee works in the opposite way that water does and dehydrates your vocal cords. As the body needs water to lubricate the vocal cords, coffee decreases your body’s ability to absorb water, meaning your voice can sound hoarse.

Coffee dehydrates the body – especially your vocal cords. With little moisture on the cords, this creates more tension between them which shortens your vocal range and limits your capabilities. The task of singing also becomes more difficult because your body has less moisture to lubricate the cords.

However, one study found no correlation between drinking coffee and singing. A group of individuals consumed caffeine tablets and found no difference in the body’s ability to create sound and perform at your usual level.

Hannah Meredith, singing teacher at River Studio, says, “Caffeine dehydrates you, so therefore dehydrates the vocal folds. Ideally you want to avoid caffeine and you want to have lots of water to keep the folds hydrated and ready to sing.”

If your vocal cords are hydrated, you’ll have a less chance of vocal injury and temporary vocal breaks. Coffee’s dehydrating effect can encourage a dry throat, meaning you’re more likely to swallow between lyrics.

There’s no scientific evidence that drinking coffee has adverse effects on your vocal cords. However, singers experience a difference in their vocal quality after regularly drinking coffee.

How Many Calories Does Singing Burn?

Have you ever wondered how many calories you burn whilst singing, or perhaps you want to calculate it yourself? Hitting the high notes requires a tremendous effort; you’ll likely feel exhausted after a performance.  Singing exerts a lot of energy and it’s hard to sing on pitch if you’re physically unfit, as you need to... Read more »

Alternatives to coffee if you have anxiety 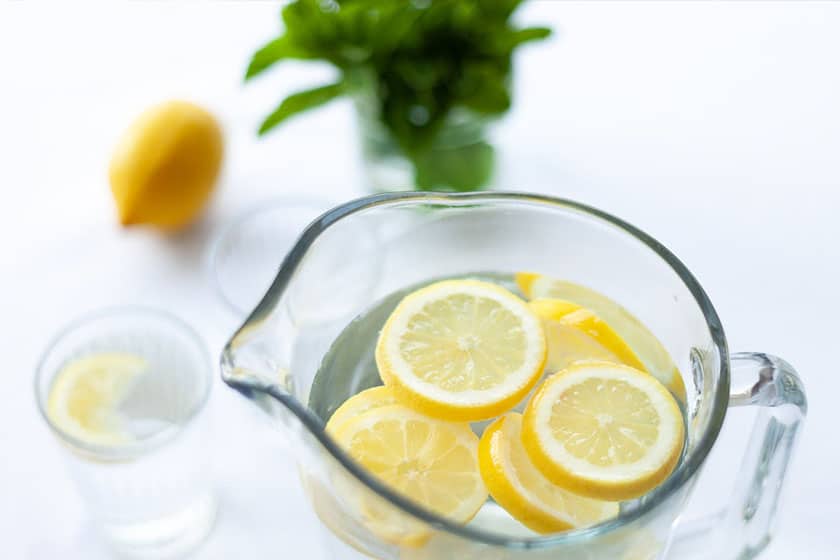 Green tea: This has less caffeine than coffee and is packed with antioxidants to fight diseases

Lemon water: A refreshing drink which provides an instant pick-me-up

Pomegranate juice: Filled with antioxidants and energisers, plus vitamins and minerals

Should you avoid coffee on performance days? 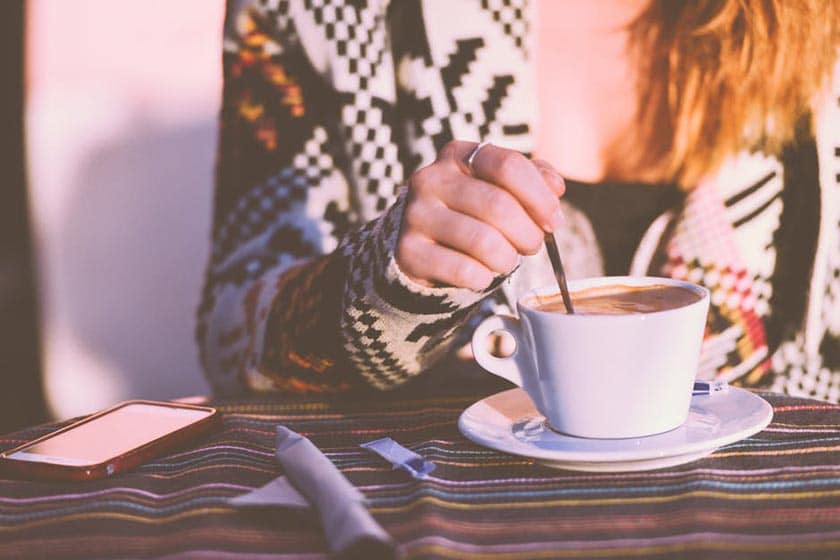 Let’s not dismiss the positive health benefits that coffee has. Firstly, it can increase your energy levels, thanks to the caffeine. This increases dopamine levels which also improves your mood and supports mental function. If you’re feeling tired on your performance day, we recommend drinking one cup of coffee three-four hours before your big moment.

Any later, and you risk agitating the vocal cords with dehydrating.

Drinking more than one cup on the day of your performance could stimulate any anxiety and nerves you might feel before hitting the stage. Also, caffeine increases your heart rate, which as a result, can make breath control much more difficult.

The Best Singer’s Diet for a Healthy Voice

Have you ever wondered what the best diet for singers is, or what foods and drinks are best for singers? What you eat or drink can actually have an affect your performance. There are certain foods that help enhance your vocal health and some that are bad for your singing voice. Understanding how to structure a singer’s diet for a healthy... Read more »

A study on caffeine and vocal cord dysfunction

Earlier in this article, we mentioned a study. To give you a little more detail, in 1999, research was conducted into caffeine and vocal cord dysfunction.

The study stated that there was a common thought that:

“Caffeine is considered to be a dehydrating agent with detrimental effects on the quality of voice of persons ingesting it. This has led medical personnel dealing with voice disorders, especially in the case of professional voice users, to give advice against the use of caffeine.”

However, this statement was deemed to be purely anecdotal, as no scientific evidence was found to suggest that caffeine could have an adverse effect on a singer’s vocal cords.

As a result, the researchers decided to create a pilot study to see whether or not caffeine was bad for singing voice and if coffee did affect vocal cords.

The study included administering 250 mg of caffeine to 8 people. The researchers then recorded blood levels and laryngograph readings to see if any vocal cord changes were registered.

“Analysing the irregularities of frequencies in a) free speech b) a reading passage and c) singing ‘Happy Birthday’, substantial changes were seen to authenticate the fact that caffeine does produce alterations in voice quality, but these alterations have considerable intra-subject variability.”

What that means is that they could not be 100% certain that coffee was bad for singers, as the sample wasn’t large enough.

To date, a fuller study with wider parameters has never been completed. So the best advice is, if you’re going to drink coffee on the day of a performance, proceed with caution. Consider how caffeine affects you personally, but certainly don’t overdo it.

Is Tea Good or Bad for Singing and Which Tea is Best?

The best tea for singers can have a positive effect on your voice. However, there are certain foods and drinks you might have to remove from your diet to focus on your singing. As a general rule, you should drink water at all times but is tea good or bad for singing and can it harm the... Read more »

What’s your experience with drinking coffee and singing? We hope this article helped clarify how coffee is good and bad for singers, and when you should avoid it.

This is the first time that I’ve read about this. I didn’t know that coffee is a dehydrating agent. “Let’s not dismiss the positive health benefits that coffee has.” made me finish reading the article.

good for you frank

Is Cold Water Good or Bad for Singers?

Is Tea Good or Bad for Singing and Which Tea is Best?

Are Spicy Foods Bad for Singing? Should You Avoid Spices Before Performing?

How Many Calories Does Singing Burn?