Preston Open Mic Nights – The Top 10 Best Nights Near Me

Preston in Lancashire is the home of plenty of open mic nights with an eclectic mix of music styles and tastes. Preston open mic nights provide you with the opportunity to showcase your material in a wide variety of locations.

Looking for an open mic night in Preston? The venues below attract the best of the city’s brilliant musical talent, ranked in no particular order. 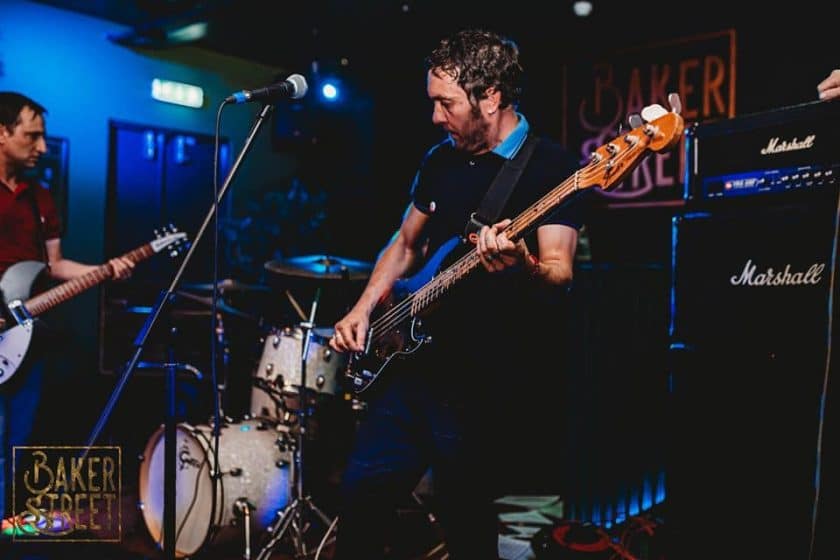 The open mic at Baker Street is a great one to try out if you play an instrument or like to jam with other musicians.

Open to everyone, this open mic provides drum kit and PA Make sure to bring your instrument along if you want to showcase your stuff. Amps are also provided.

Bands and solo artists are all welcome, with any genre.

This venue has only been open for a short time, but its open mic is a great asset to Preston’s music scene.

Hosted by Joanne Louise Griffiths, this night has a very warm and welcoming atmosphere.  Bring your instrument or borrow one of Joanne’s – PA and backline are provided.

If you’re a singer, showcase your talent by singing acapella, with your band or using a backing track.

Don’t want to perform? Head down anyway and be entertained by some of the best talents in Preston! The night starts at 8:30pm every week. 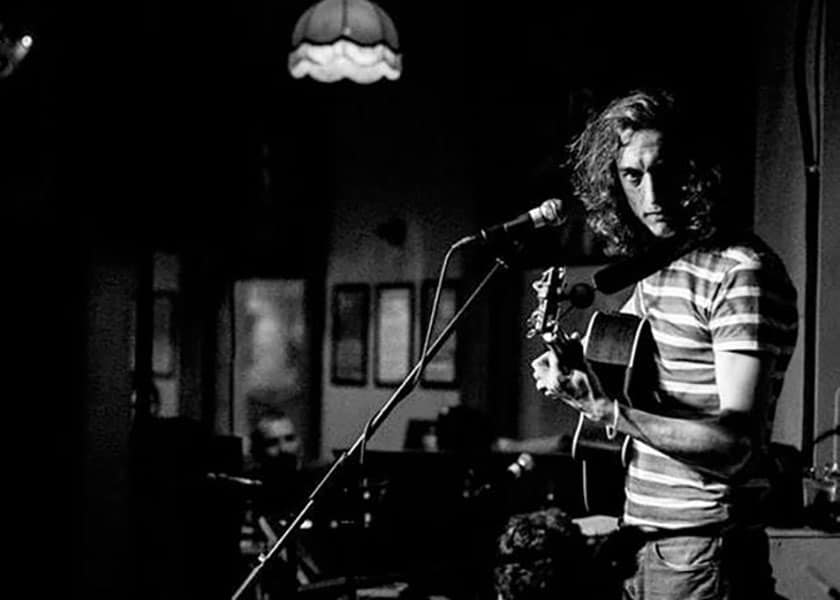 The open mic jam night at The Railway has been going for about two and a half years now.  Gavin Da Goliath has been running it for six months now with a consistent format.

There’s a drum kit, bass, and acoustic guitar provided. If you’re a percussionist, they have plenty of  instruments and a small glockenspiel for anyone to use.

Having so much kit, the jams can get quite noisy at times, with blues guitarists shredding over reggae. It becomes fairly quiet and attentive for the acoustic performers though.

Turn up and play – they want the night to be completely open and welcoming. They also believe that pre-books can sometimes scare walk-in artists away, so they don’t have that option.

The Railway’s open mic night always does its best to give everyone a slot. The music starts at 8pm and runs till late.

Open Mic Night Near Me 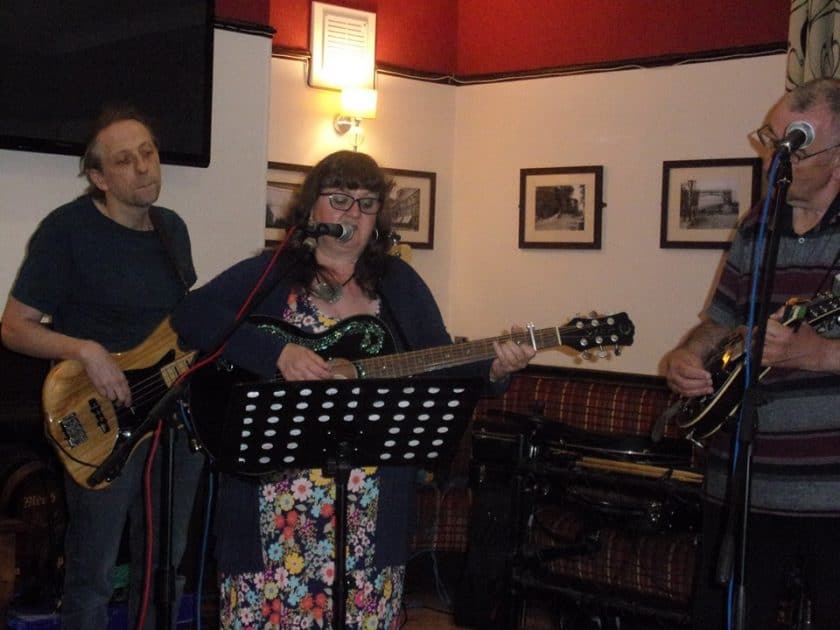 Another one of the open mic nights hosted by Andrew Smith, this open mic has been running for 2 years now.

Get down there at 9pm and just turn up and play. It’s run on a first-come, first-served basis and frequently gets busy, while a chilled out and relaxed atmosphere is always maintained

The night gets a mix of professional musicians, people who do it just as a hobby and complete beginners. All styles of music including original material are more than welcome. All musicians get treated with the same respect no matter what their standard. 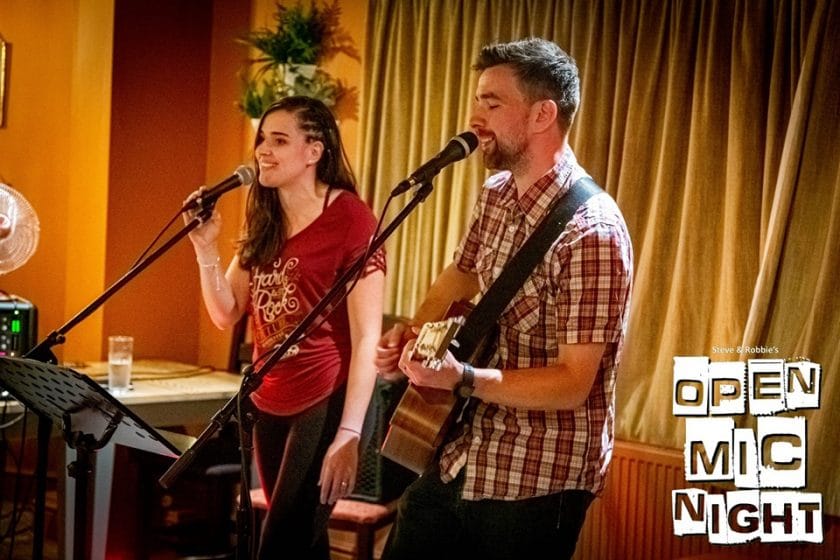 The Oak open mic has been running for seven months now. Steve and the team provide the PA, a guitar, a bass and a Cajon for anyone who turns up.

This place gets quite a range of stuff, from your typical rock-pop covers to singer-songwriters, poets, comedy singers and even light up hula hoop dancing!

Steve always does his best to keep things easy-going, even when it gets really busy. It has been getting busier and busier as time has gone on.

The night takes place in the dining area of the pub, where there is a raised area that makes a perfect stage.

Things kick off around 8:30pm and runs until 11pm. There’s no need to book a slot, just turn up and put your name down. It tends to be in the order of arrival, but Steve’s more than happy to be accommodating.

Bonus: They also do a free video of one song from each act! 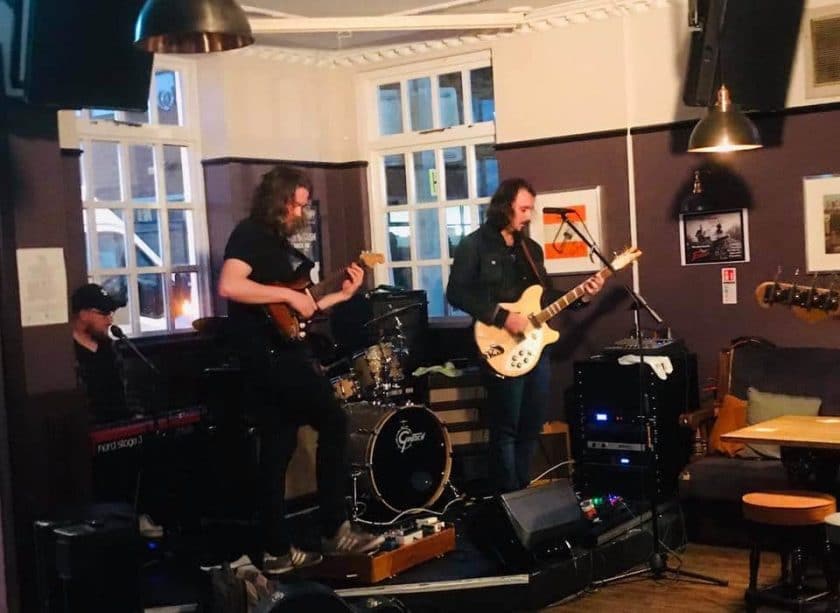 The open mic at Vinyl Tap is another great night to try out if you’re looking for a music event on a Tuesday night.

The night has recently returned after a brief hiatus, now providing kit and PA.

Everyone’s welcome – make sure to bring your instrument along to guarantee yourself a slot during the night.

All performers get a free bottle of Budweiser too! 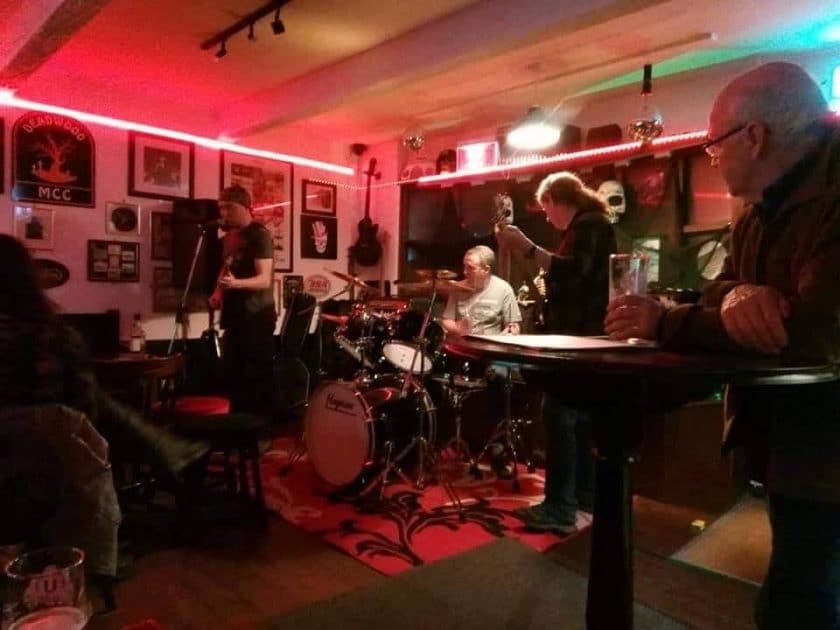 The Buskers’ Ball Open Mic was started and is hosted by Alec Martin. It started around 25 years ago and was one of the oldest open mics in the North West.

At the moment, it’s run every Sunday afternoon at Lucky 8’s Rock and Blues Bar in Chorley. There you’ll find a quality Bose PA, guitar/Cajon are provided, but they encourage people to bring their instruments, as a guitar is very much part of an artist’s ‘sound’. Performances are also videoed which would be some great promo material for your portfolio.

When The Buskers’ Ball was in Bolton, Danny Jones learned his craft there, and they even had McFly popping in for an acoustic set!

The venue is a small bikers’ bar in Chorley and the session takes place in the main bar. The sessions are on the second Sunday of each month from around 3pm to 7pm. It’s better to book a spot by contacting Alec on Facebook, but the finish time is flexible, so they can fit most people in if they turn up unannounced. 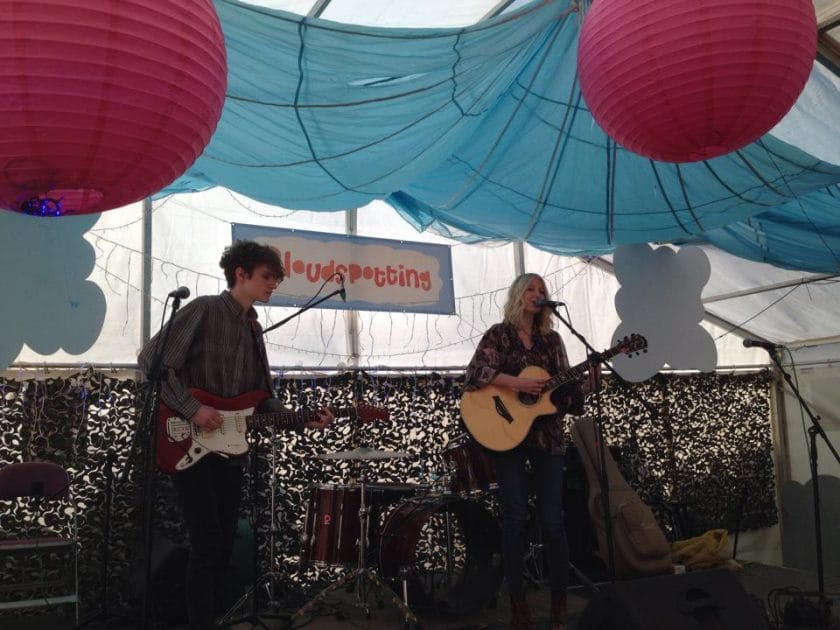 The open mic night at The Continental (also known as ‘New Continental’) is one of the friendliest, most supportive nights in town.

Whether you sing, play guitar, or do stand-up or spoken word, head down and pick up the mic at one of the jams with new hosts James & Typhaine.

If you don’t want to play straight away, make sure to go along and sample some of Preston’s music scene for yourself. 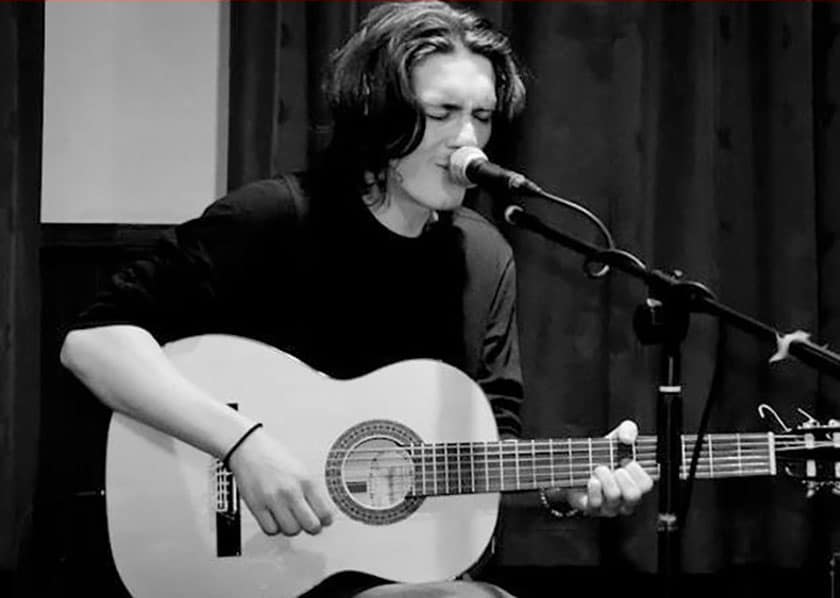 Occurring every Wednesday, the nights here are hosted by various guest local artists and bands. Having a different host every week makes sure that this open mic is kept lively and spontaneous for everyone involved.

Head down to this one if you’re interested in playing solo, jamming with a band, performing stand-up comedy, or showcasing your poetry.

A full backline is provided (excluding breakables), so bring down whatever extra kit you think you might need, this includes instruments. 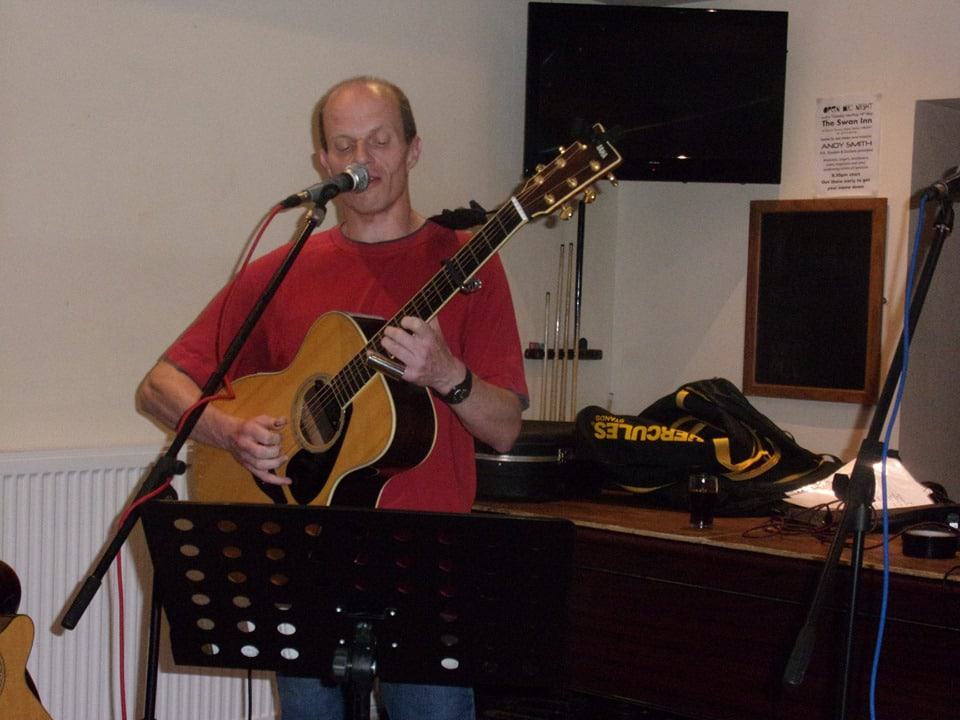 One of the many open mic nights hosted by Andrew Smith, The Swan Inn open mic has been running for about 4 years.

Get down there at 9pm, turn up and play. It’s run on a first-come, first-served basis and can get quite busy, but Andrew aims to provide a relaxed atmosphere for all.

The Swan gets a mix of professional musicians, people who do it just as a hobby and complete beginners. All styles of music including original material is welcome. Everybody gets treated with the same respect no matter what their standard.

Head downstairs and you’ll find a PA system and the acoustic guitars that are provided. People are also more than welcome to bring their equipment.

The final night hosted by Andrew Smith, this a relatively new open mic that’s been running for 9 months now.

Head down for 9pm and just turn up and play. It’s run on a first-come, first-served basis, and it can get fairly busy some nights, so get down early.

The Pleasant Retreat gets a wide range of abilities, so everyone’s welcome. Every musical genre including original material are permitted. Everybody gets treated with the same respect no matter what their musical ability is.

At the Pleasant Retreat, go downstairs and you’ll find a PA system and the acoustic guitars that are provided. You can also bring your equipment if you want your specific sound. 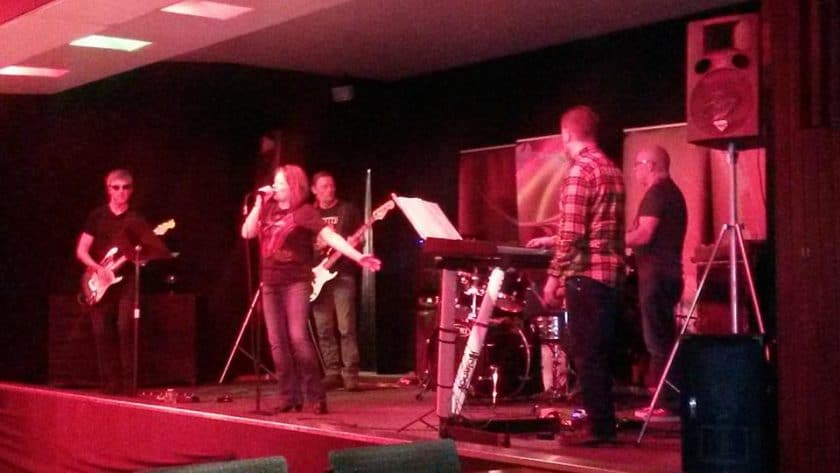 If you’re looking for a great way to spend your Sunday, check out the open mic at Lostock Hall Conservative Club.

Head down to Lostock Hall Conservative Club for free sandwiches, cakes, a raffle, and some great music to end your week.

Finally on our list we have the open mic at The Speakeasy. This open mic happens fairly sporadically, so make sure not to miss it when it happens.

Usually hosted by Fitzsy, these nights can coincide with specific events (such as father’s day) or just random nights throughout the year.

It always has a supportive atmosphere whenever you go. Keep up to date with their events here.

So now you know where to perform in Preston there are no excuses for not getting out there and performing!

Open mic nights near me in Preston

Leeds definitely has quite the music scene, with huge successful bands including the Kaiser Chiefs and The Pigeon Detectives all originating from Leeds. Thankfully, the Leeds open mic nights certainly reflect their love for music and bring the very best opportunities to perform your music live in front of attentive audiences. Best Open Mic Nights... Read more »

Have you considered entering Open Mic UK? Auditions are coming to Preston!