Sheffield has a fantastic live music scene and is the birthplace of the Arctic Monkeys, Def Leppard and Pulp (Jarvis Cocker’s lyrics adorn the side of The Forge on Boston Street). There are Sheffield open mics, gigs and jam nights and on offer most nights of the week – from lively bars like The Green Room to traditional pubs like The White Lion.

Looking to get involved in the bustling live music scene in Sheffield? Open mics are a great place to start and here are our favourites, in no particular order. 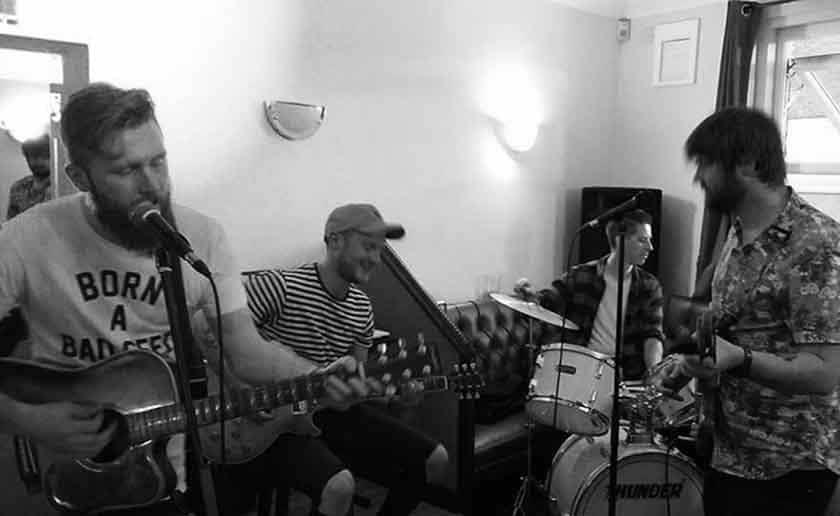 The Forest is a family-friendly pub located just outside of Sheffield’s famous Kelham Island.

Hosted by Chris of Treebeard, Haze, etc. (with co-host Paul Pearson), they encourage everyone to perform, no matter how experienced. There are a number of artists who had Chris accompany them on guitar for their first performance and have since developed the confidence to accompany themselves.

There’s usually a featured artist playing a 30 minute set around 9.30pm, which has proved very successful (they have a list of artists wanting to play).

It’s held on a small stage laid out in the main room of the pub. A PA is provided but acts are asked to bring their own instruments, although there is a Cajon drum made by one of the regulars available.

Acts are asked to put their name down on a list to play two songs. The atmosphere is very relaxed, there’s no age limit and plenty of room for everyone. 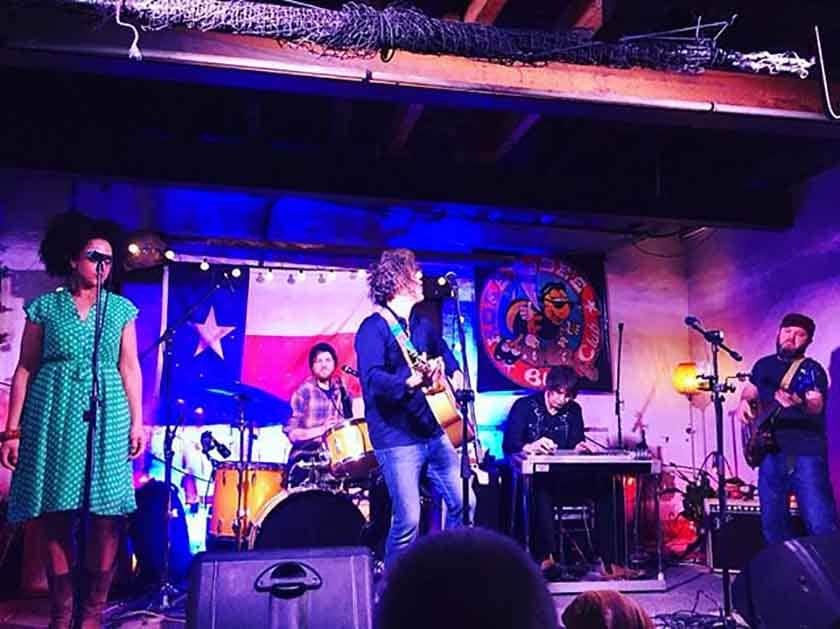 Sunday Sessions has been running since early 2018 and Glenn Jackson hosts. It’s set up on their wonderful stage and has great in-house PA.

The nights are varied in attendance but a really kind, lovely audience is always promised. 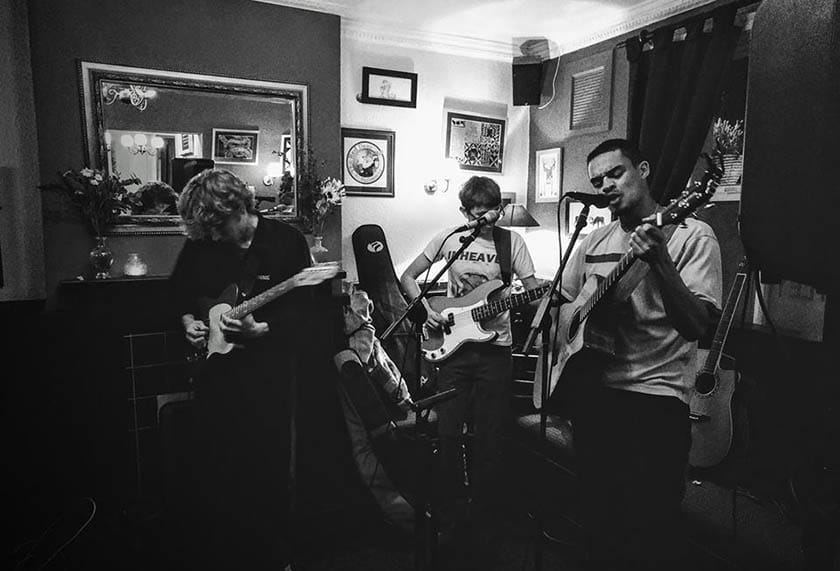 Hosted by Jordan Wrigley & Jonathan Pearmain (with sound engineer Chris Grimshaw), their night has been running for a little over a year and attracts a high level of talented musicians.

A variety of acts perform, ranging from spoken word to 3-4 piece bands, with the majority of performers being singer-songwriters, usually with an acoustic guitar.

It’s a busy night, and while they try to accommodate everyone, they can’t always get through everyone. So sign up early to guarantee a slot.

They try to put up a live stream each week, so you can get some idea of how everything works if you check those out. 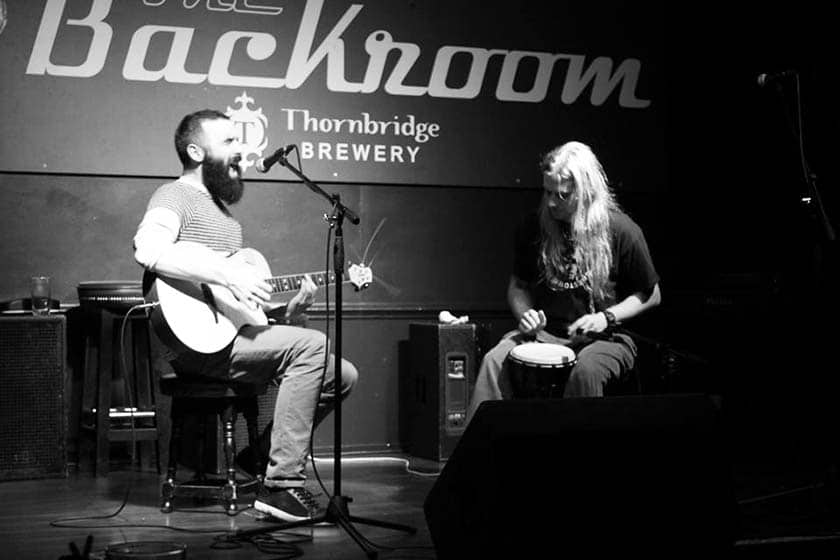 Hosted by Billy Christmas, the night is held on the stage in The Backroom. It’s mostly Blues, Folk and Americana, but all genres and levels of performers are welcome.

PA and mics are provided so just head down with your instruments and your friends to enjoy the proceedings.

Just a short walk from the hustle and bustle of Hillsborough is The Castle, a traditional pub selling a selection of cask ales. They pride themselves on being a fully inclusive pub and always offers a warm welcome to all its customers.

Running over 7 years, the jam is hosted by Dog, Andy, Nathan and Dom – all multi-instrumentalists and vocalists who can turn their hand to almost any style.

Full set up of quality gear including guitars, bass, drums, keyboard and 3 vocal mics. Musicians are welcome to bring their own guitar but everything else is provided.

Family friendly and new, young talent is positively encouraged. Very friendly, welcoming atmosphere. Get there early to get your name on the board as it fills up quickly later in the evening.

The night is usually quite busy – solo artists and bands are all very welcome and can be accompanied by the house band if needed. 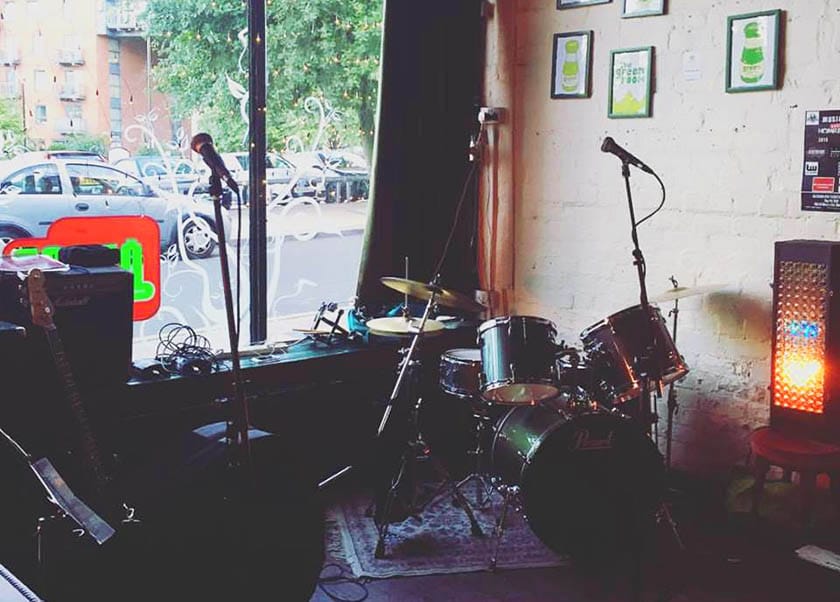 The Green Room is a lively bar with an eclectic programme of live bands and a great retro-meets-modern interior.

Glenn Jackson (who also hosts the Toolmakers above) hosts and the night has been going for over a decade. There’s a drum kit, electric guitars and bass, plus both amps. Also 2 house electro/acoustic guitars, 2 D.I boxes and 2 mics.

They set the stage up in the bar window. Jam, sing or recite us a poem, anything goes here. 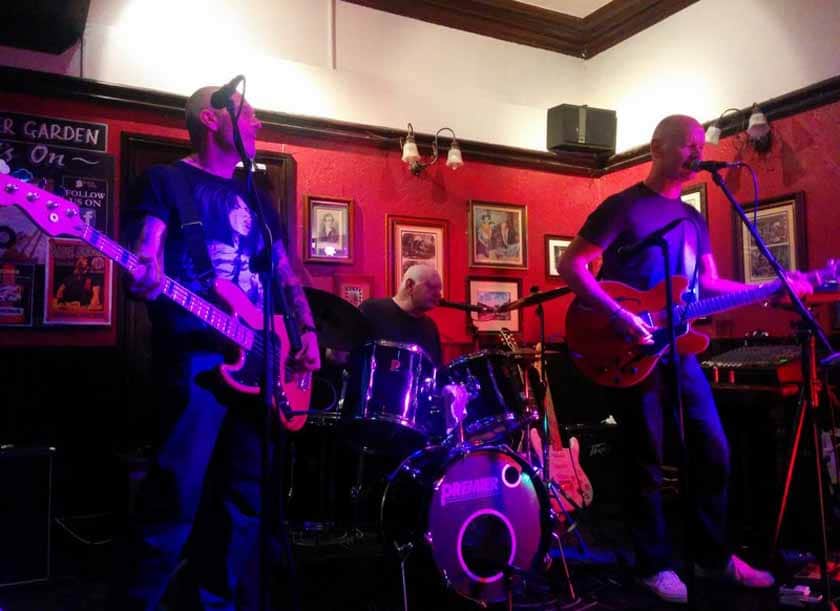 The White Lion is a heritage pub steeped in Sheffield history. Renowned for their live music, there are free events all week long and a warm, friendly atmosphere on tap.

Thursday jam is hosted by Chris Firminger and The Two Jays and it’s a very eclectic, fun night.

Full PA and backline are provided, plus a variety of instruments. Performances run from rock to dub reggae and take place in the main room of the pub.

A wonderful night full of highly talented musicians but they also cater for all abilities. It’s a perfect platform to showcase your music and even secure a full paid gig. 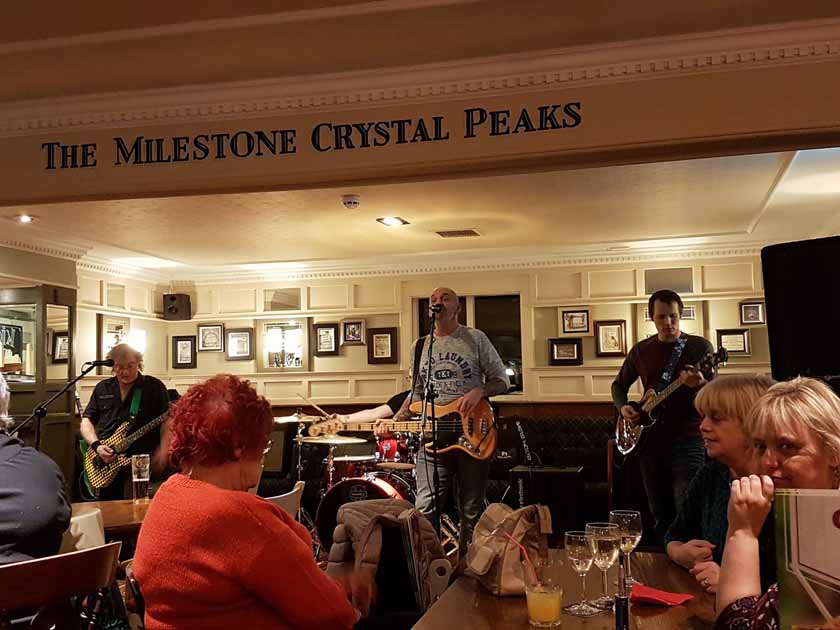 The Milestone has a full electric jam, which has been running for 6 years. The night is run by the Jammers and not the pub, so this is their own jam.

An in-house PA can be used by the bands, which allows smaller, upcoming bands without a PA to host. The band provide back line and their instruments, most jammers prefer to bring their own instruments (except the drummer of course).

They generally get rock and pop covers, but anything is welcome including acoustic. The night is chilled out and can often be busy, plus there’s free food for everyone at halftime.

Due to the venue’s licence ending at 9pm, this is an adults-only jam. Sunday alternates between an acoustic jam (hosted by Jamie Mallender), Sunday solo sessions and Milestone Unplugged, which is a local band. 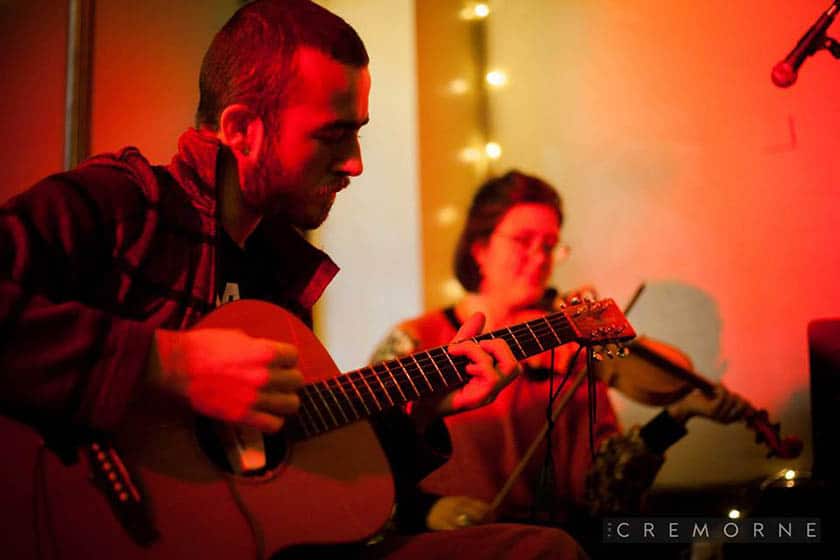 The Cremorne is a cosy, traditional pub with a classic log burner and 8 rotating ale pumps. It has a huge variety of different people and they have acoustic sessions every Wednesday and live bands on a Friday.

Tuneful Tuesdays is a friendly, any-style-goes weekly event. Hosted and warmed up by the very talented and uplifting vocal style of Carrie Allen. She’s been running the night for almost 11 years.

A full PA, guitar and mics are provided. There’s also various percussion instrument distributed around the pub for everyone to use and join in.

The night varies from week to week, but it’s mainly electro/acoustic acts. They sometimes get saxophones, violins and occasionally full bands come down for a mini set.

Performances take place on a small stage and the nights are a mix of regulars, some new faces and a whole selection of different styles.

If you want to play put your name on the chalkboard to secure a place. 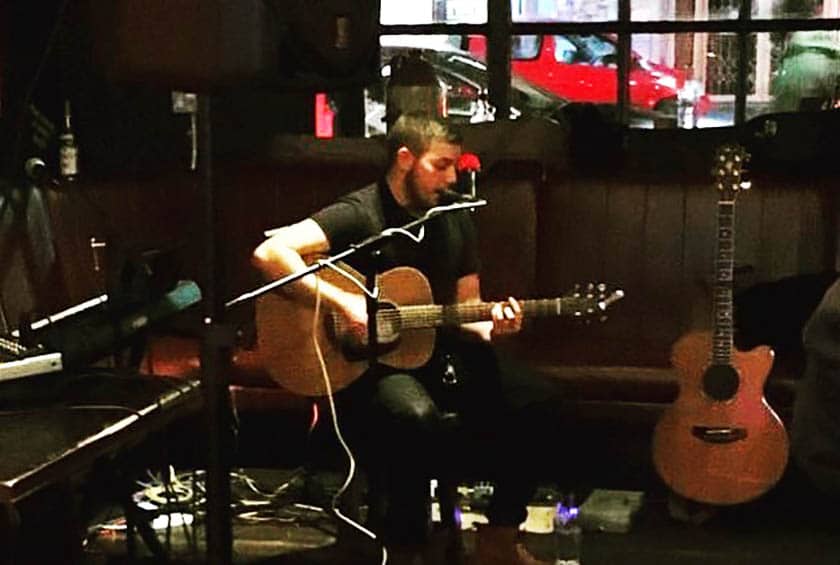 The Fox and Duck is mainly a traditional sports pub and their open mic takes place in a cosy corner of the bar.

A company called Rotunda has been running then night since October 2018. They provide a PA system and the artists bring their own instruments.

It tends to be acoustic acts mainly, however they’ve also had some interesting performances with violins to mix things up.

Usually a chilled out night, but it can be relatively busy.

The Porter Cottage is a classic local pub that features an incredibly popular jukebox! The weekly blues jam is hosted by Steven Delaney, who is a very talented local musician who loves meeting new talented artists.

As this night is more of a jam session, you are welcome to bring along your own instruments to join in on the collaborative creation of music. Everyone can join in a jam along together in a very relaxed and friendly environment. There will also be opportunities to perform on your own. 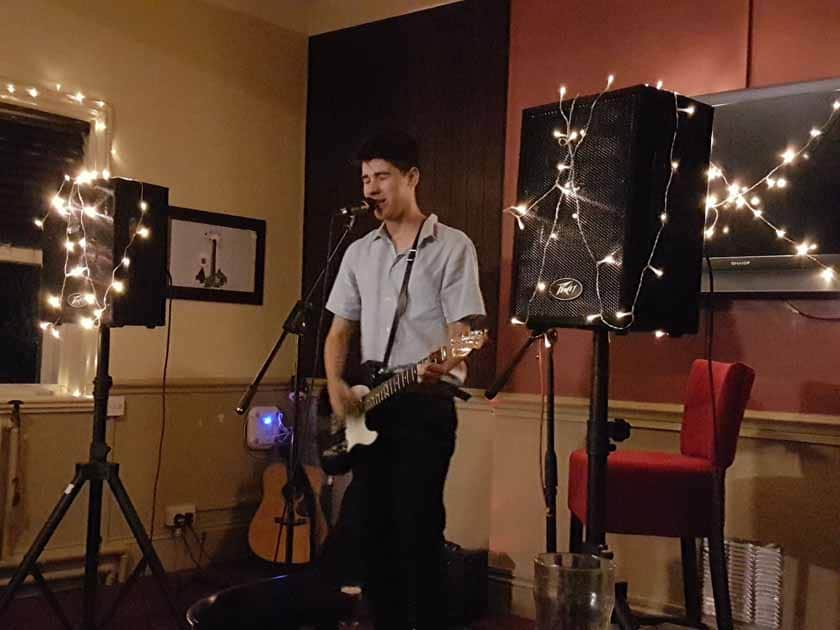 Open Mic Society’s Open Space is a great chance to show off your talents.

Hosted by a committee of students, generally regulars from the year before sign up to run it. They have a PA system set up and provide a house guitar. They’ve accommodated for keyboards, Cajons, electric guitars, and even a steel drum.

It’s mostly singers with guitars, but they generally have 1 or 2 poets dotting around too.  Sets are usually 3 songs (or 10 minutes) and there’s a house guitar available to borrow.

Whether you’re a musician, a poet, a comedian, a first-timer or a seasoned performer, everyone is welcome to get involved.

The Gardeners Rest is a community pub that keeps local events alive and serves great food and drink while they’re at it! Dronny Bottom Buskers host this monthly open mic night, an acoustic duo who absolutely love live music in all forms.

The monthly folk club features a different guest act every single month and allows plenty of time for every musician there to have the centre stage. As it’s a folk club, it’s mainly acoustic folk singers but as long as it’s acoustic, you are welcome to perform whatever you like.

At the end of the night, everyone gets together for a big jam which is a great way to meet and collaborate with other musicians.

So, now you know some of the top open mic nights in Sheffield there are no excuses to get out there and get performing!

Open mic nights near me in Sheffield

There are some top-class venues for live music in Newcastle upon Tyne and a rich history of Geordie performers who started off there. A host of musicians, including Bryan Ferry of Roxy Music, Dire Straits, Sting, Pet Shop Boys, Andy Taylor of Duran Duran and, more recently, Cheryl Cole, have all hailed from the City.... Read more »

Have you considered entering Open Mic UK? Auditions are coming to Sheffield!