Molly Hocking battled against Jimmy Balito (also a former competition Grand Finalist with Open Mic UK in 2014), Deana Walmsley and Bethzienna Williams in the Grand Final on Saturday. The 18-year-old from St Ives was the bookie’s favourite to win and she was also the youngest contestant on this year’s show.

At the beginning of the show, the 18-year-old wowed the audience with her version of Lewis Capaldi’s ‘Someone You Loved’:

Her performance even earned a shoutout from Lewis Capaldi himself:

unreal to hear a tune i wrote being covered on the final! ??? xox

As Jimmy and Bethzienna finished with the least votes, it was down to Deana and Molly as the last two competing.

Molly sang a masterful version of ‘I’ll Never Love Again’ from A Star is Born for the second time in the competition:

After a brief break, presenter Emma Willis announced that Molly as the overall winner.

“Someone pinch me,” a thrilled and emotional Molly exclaimed during her final interview. “All I can say is thank you, from the bottom of my heart all I can say is, I’m shocked, thank you so much!”

The Winner of #TheVoiceUK 2019 is…@hocking_molly!

Number One Song on iTunes

Molly released her debut hit, ‘I’ll Never Love Again‘, after the show and it went straight to Number One in the iTunes singles chart. This makes her the second winner to immediately reach the top spot after the competition. 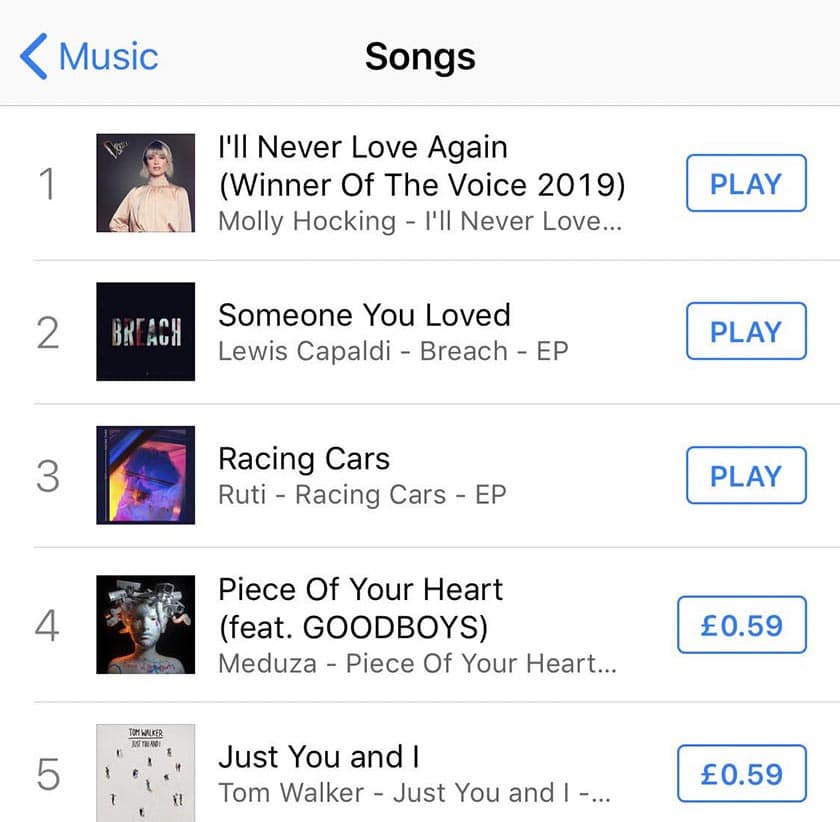 Returning as the four judges for The Voice UK 2019 competition were:

Molly sang ‘You Take My Breath Away’ by Eva Cassidy in the Voice UK 2019 audition and impressed the judges, with three out of four of them turning for her.

She decided to join Team Olly and the 18-year-old’s success means Olly Murs has scored his first win as a coach in the competition.

How to Apply For The Voice UK Auditions

The Voice UK is a British television talent show on ITV. There are two stages to The Voice UK auditions: the producers’ auditions and the blind auditions. There is also now the Voice Kids auditions which are also set to re-appear in 2020 (you can see how to audition for The Voice Kids lower down... Read more »

Molly Hocking in the TeenStar Competition

Molly has been performing and acting since she was just 5-years-old and she previously competed in the national singing competition, TeenStar in 2014, reaching the Grand Final, where she lost out to X Factor star Emily Middlemas.

Then just 13, she wowed judges at an Exeter heat of the competition and she later performed ‘Songbird’ by Eva Cassidy at the Area Final in Fareham:

And she went on to reach the National Grand Final at the NEC, Birmingham, where she sang ‘At Last’ by Etta James:

Molly’s mum, Sarah, told Pirate FM: “Molly has been singing since she was seven and has always wanted to perform.” Adding, about the competition: “She was only thirteen at the time but it was a great experience.”

In 2017, Molly also reached the boot camp stage of X Factor on ITV.

You can show your support and follow Molly on her Social Media: