Home >> Advice >> What is Karaoke? Can Karaoke Help Your Singing?

What is Karaoke? Can Karaoke Help Your Singing?

Karaoke originates in Japan, but it has become a favourite pastime worldwide. Many pubs and bars across the globe welcome amateur singers up on stage to belt out renditions of classic songs using lyrics on an interactive screen. But what does a karaoke night involve and how does it differ to videoke and an open might night?

Pubs and bars worldwide host regular karaoke nights and the digital sing-along can be enjoyed at home and on apps. Karaoke is a fun stress-reliever, but it shouldn’t be confused with videoke or open mic nights.

Karaoke can be a lighthearted, easy way to get into performing and work your way up to performing original material at an open mic night. It can actually help you improve as a singer in a surprising amount of ways, too. 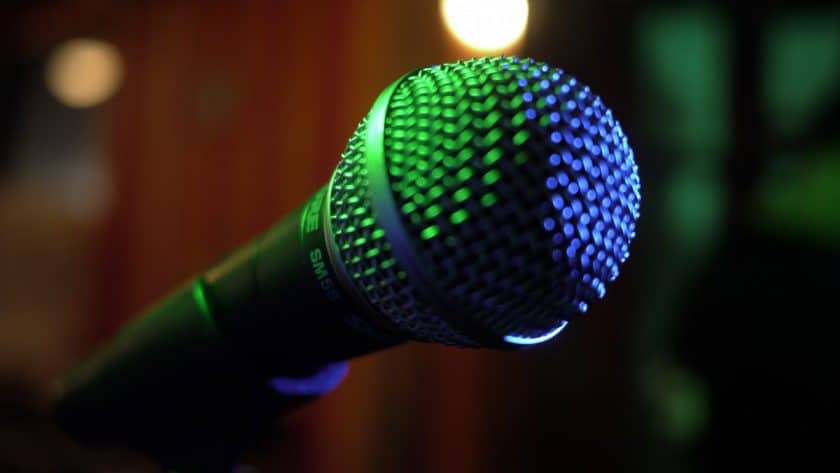 Karaoke is a form of interactive entertainment where well-known songs are played with the lyrics removed. Amateur singers can get up and sing the words themselves.

It’s performed in bars and pubs worldwide, with many venues and student unions hosting regular sing-along nights. karaoke can also be performed in the comfort of your own home using karaoke machines, TV monitor systems or through downloadable karaoke apps.

The word “karaoke” is a Japanese portmanteau word. It is made up of the Japanese words “Karappo” which means ’empty’ and “Okesutura”, meaning ‘Orchestra’. The literal Japanese translation is “empty orchestra” – a reference to how the backing music of popular songs is played without the lyrics.

Wherever you perform karaoke, there is usually an interactive screen involved. The singer uses this to select their song and read the lyrics as they perform. A bouncing ball, changing colours or images will appear on screen to help the performer keep pace with the music. These virtual guides highlight or hover above the word at the time the performer needs to sing them.

Where does Karaoke come from?

Sing along music is widely accepted as the predecessor of Karaoke. The concept of sing-along began in the US in the 1960s with the American TV show, Sing Along with Mitch. The programme included superimposed lyrics at the bottom of the tv screens, so viewers could sing along at home.

There is some dispute whether karaoke is Japanese of Filipino. There was an influx of musicians and performers from the Philippines into Japan at the time. These musicians brought “minus-one music” with them – cassette recordings which had versions of the same song available with and without lyrics.

The first karaoke machine was created in Japan in the early 1970s, and the industry grew from there. It started out in hotels and bars and was viewed as a gimmick. Over the years its popularity grew, with venues hosting regular nights. By the 1990s, karaoke spread to the rest of world.

There’s some mystery surrounding how karaoke started. One belief is that it began in a Japanese snack bar when the owner invited guests to sing to backing tracks when the booked musician didn’t turn up.

It is commonly accepted that karaoke was founded by the Japanese singer and inventor Daisuke Inoue, who built the world’s first karaoke machine, The Juke 8, in 1971. 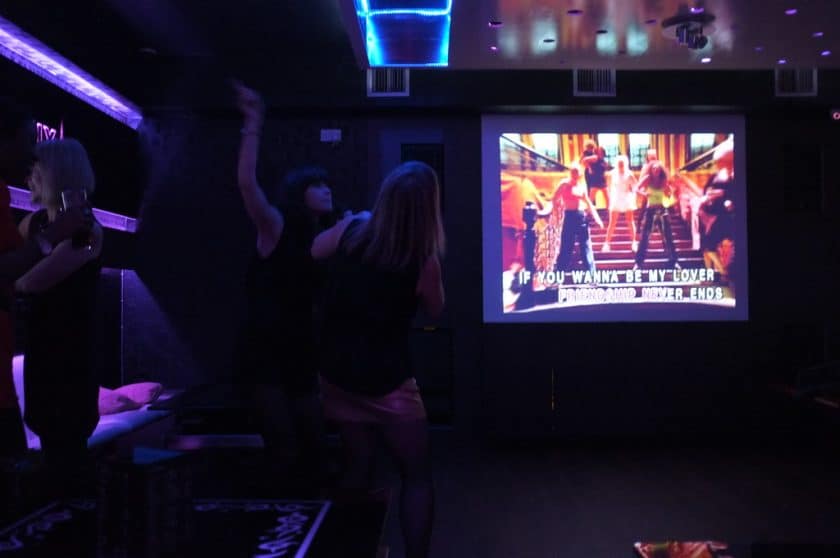 Karaoke is a firm favourite in pubs and bars up around the world. Many venues host nights on a weekly basis, while some even have a one every night.

These nights will differ greatly according to where they’re hosted. The atmosphere is always the same, light–hearted, liberating and relaxed. You can expect the crowd to be supportive and welcoming because karaoke-shaming – booing or jeering during or after a performance – is against then entertainment’s protocol.

If you pick an upbeat, well-known song the crowd might even join in while you’re on stage. In some cases, mic hogs might literally join you on the stage and try to steal your song and thunder. If your song is interrupted, the best way to keep the mood light is to laugh it off, go with the flow and start a duet.

A Karaoke rendition may not be as serious as other types of performances, but it can still be daunting. Follow these five tips to survive your first ever Karaoke night:

Mastering audience participation is very relevant for a singer or musician to understand. What are the best techniques for getting a crowd going? Fortunately, we’ve found a number of great techniques that you can use to encourage audience participation. Knowing how to get your audience to respond during your live performance is essential if you want to be in with a good chance of growing and maintaining your... Read more »

Karaoke nights near me

Karaoke nights are greatly influenced by the local area and culture. Some songs will be more popular in one town while another genre of music will have a heavy rotation in another place. Some karaoke nights even have themes – there will be a greatest hit karaoke night or a cowboy dress code for anyone coming into the venue.

Karaoke is as flexible as you want it to be: you can sing one song or several, perform as a solo, duet or even a group. Everyone gets their moment to shine up on stage, and people enjoy not just being entertained but being part of the entertainment. Take a look to find a karaoke night near you.

What is the difference between karaoke and videoke? 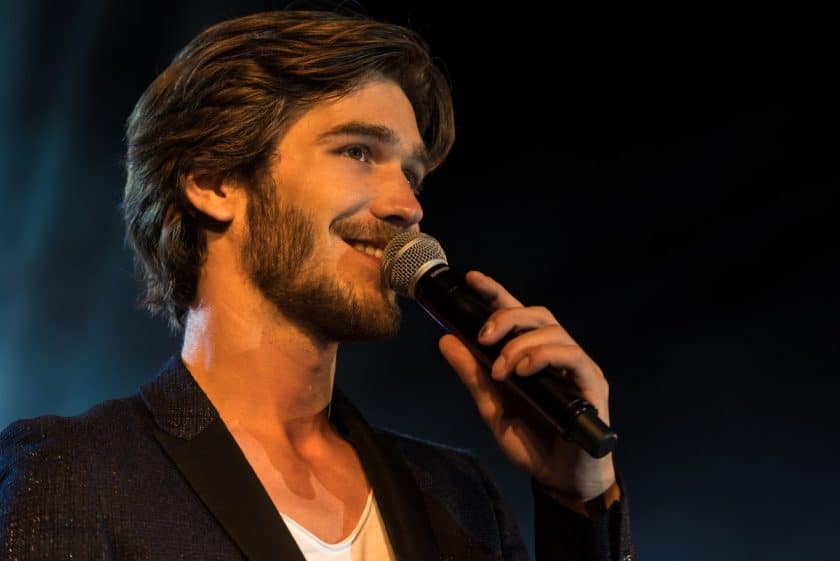 Videoke is a lesser known variation of karaoke. Much like karaoke, the singer will perform lyrics from a digital screen to a backing track with a cursor to help them keep pace. But unlike the original version, the singer will be given a rating at the end of their performance. They have to follow timing and pacing cues throughout the song to try and achieve the 100 top score grade.

Videoke is mainly performed at home and it’s most popular in the Philippines. Any type of sing-along music is incredibly popular with the Filipinos; almost every home in the Philippines has some form of karaoke entertainment. If they don’t have a machine, they have a Magic Sing Microphone – a digital mic that connects to the TV to turn it into a karaoke player.

Karaoke may not require the voice of a professional singer but having a strong song behind you will help you feel confident on stage.

What is the difference between Karaoke and Open Mic?

Karaoke nights shouldn’t be confused with Open Mic nights. Anyone can have the chance to perform, but the similarities end there.

Karaoke is the easier of the two because there’s no need to memorise the words and it’s hard to go wrong; you can even ignore the audience and get lost in the moment while you’re up there.

There are more protocols to follow at an Open Mic night. You can still sing a cover song but your slot on stage has to be pre-determined and you should know your lyrics off by heart. You’ll be expected to perform a longer set than at a karaoke night, too. The audience will want more than just a Karaoke-style rendition of cover songs at an open mic night – they’ll expect a performance and to see you put your own stamp on a song. To find out more about open mic nights, read this supporting page on what to expect at an Open Mic.

Open Mic Nights for Singers: How They Work & What Happens

For singers, open mic nights may not be quite on a par with an actual gig, but playing at an Open Mic night will have its benefits for you. Your best bet would be to scout out which venues in your local area host the events, then try and attend maybe one or two every week. If you are serious about a career in the music industry then performing at open mic nights for singers is a must!

Can Karaoke help your singing? 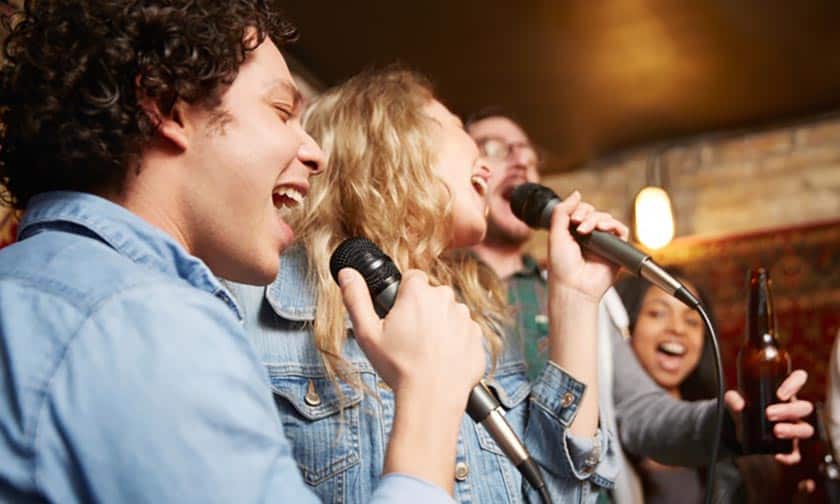 Just because Karaoke is lighthearted and fun, it doesn’t mean that it can’t help improve your singing at the same time. Here are five surprising ways Karaoke can help you as a musician:

The lyrics will be on screen in front of you, but singing karaoke still gets your brain to access its short-term memory and improves your cognitive function.

#3 Teaches you a better breathing technique

Karaoke uses your diaphragm and lungs, helping you get better control over your breathing while singing.

#4 Gets you comfortable on stage

Performing on stage regularly gives you confidence when performing.

Karaoke is a good way to get yourself heard and receive some feedback.

As with most things, you will get better the more you practice.

Start by choosing the right song for you – familiarise yourself with your voice and your vocal range and pick music that isn’t outside of your reach.  Try to engage emotionally with the song you perform.

As with all types of singing, having good technique and effective breathing will greatly improve your karaoke. Actively plan where you will take breaths during your song. Stretch your mouth, so you don’t restrict your voice’s range or power.

There are apps available for most smartphones and software for laptops/computers that allow you to perform karaoke from the comfort of your own home.

Karaoke apps allow you to record your voice against the original music on your phone and save a copy. They are a cheap alternative to buying instruments for singing. The top three karaoke apps for Android and IOS 2018 include Red Karaoke, Sing! Karaoke, and Sargam. These are all available on the app store.

If you’d rather use Windows or MAC to record your karaoke, software like Karafun Player and Kanto Karaoke are easy to install and have thousands of songs enlisted.

Karaoke has been enjoyed by amateur sings across the world for years. The industry is so popular you can now find karaoke in most bars and clubs and on the app store.

Many people enjoy the interactive sing-along because it’s a great stress reliever. You may not have to be a professional musician to sing karaoke, but that doesn’t mean it can’t help improve your singing voice.

The biggest lesson you can take away is to always have fun with your music.

Do you sing Karaoke? Let us know your favourite songs to sing in the comments.

Hi…Thank you for posting this interesting and useful post about Karaoke. You explain all about Karaoke that I never read before . Last month I visit Mac’s Tavern & Grill that is also a good Karaoke in Arlington.